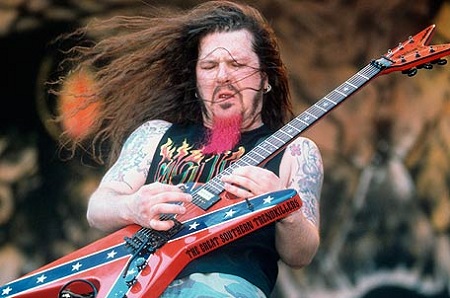 That’s why it’s a sin to kill a mockingbird.

Three decades ago today, Mark David Chapman shot and killed John Lennon in an attempt to actualize the wishes of Holden Caulfield. Thereon, December 8th became a somber day for anyone who appreciates music and hates shitty literary interpretations.

Unfortunately, this day became even more ominous six years ago as Dimebag Darrell was murdered onstage by a crazed fan. Slinging the axe for Pantera, Dimebag helped craft a brand of metal that held complete domination over the 1990s. While long-heralded heavy metal gods began experimenting with blues-riffs and mascara, Pantera maintained their dedication to savage thrashin’ and soulful groovin’. In fact,   they only became more aggressive – which is ridiculous, considering that they kicked off the decade with Cowboys from Hell.

What strikes me most about Dimebag’s playing is the originality and conviction. There is no mistaking a Dimebag Darrell riff, whether it’s one of the machine-gun facsimiles that punches you in the gut or one of the chunky stutter-steps that greets you at the party and convinces you to funnel a beer. His six-string prowess was, in a word, jaw-dropping.

Hit the jump to check out some of my favorite Dimebag moments.

The opening track to Pantera’s 1996 effort. A refutation of the watered-down brand of metal hitting the airwaves, the song (literally) starts with a scream. Dimebag’s relentless assault assails the ears, but at the 1:52 mark slides into a dirty Southern swing that summons the spirit of yesteryear’s beer-drankin’ rock & roll.

Yet again, Dimebag steals the show – his staccato riffage gets hearts’a’skippin’ from the introduction. Moreover, the tone he uses on his solos has a great fuzz while still cutting right through.

By Demons Be Driven

Maybe I’m wrong, but I get the feeling that this tune is grossly underappreciated. Even though they’re overused by many guitarists, it’s hard not to love the squeals thrown throughout the verse riff. And I can’t be the only one that listens to the chorus and envisions a T-Rex screaming as he stomps his way through a prehistoric jungle.

Dimebag’s death? Totally bogus. But the man left behind an amazing legacy. What are some of your favorite Dimebag moments?