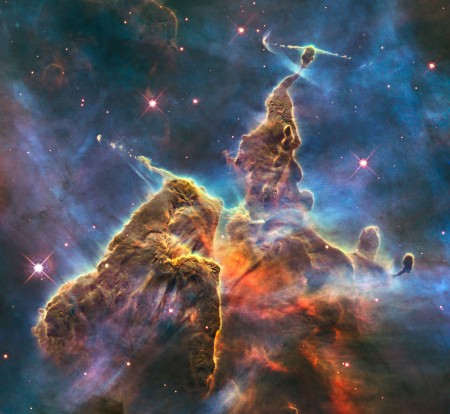 Hubble has found Mount Doom in space. Or at least that’s how the chaps at io9 are describing the Carina Nebula. Am I riding their title to fame and glory? Naw, probably just to infamy and derivation. How do you top a title like that? Hint: you can’t. They go on to quote the Hubble website’s explanation:

The NASA/ESA Hubble Space Telescope image, which is even more dramatic than fiction, captures the chaotic activity atop a pillar of gas and dust, three light-years tall, which is being eaten away by the brilliant light from nearby bright stars. The pillar is also being assaulted from within, as infant stars buried inside it fire off jets of gas that can be seen streaming from towering peaks.

This turbulent cosmic pinnacle lies within a tempestuous stellar nursery called the Carina Nebula, located 7500 light-years away in the southern constellation of Carina. The image celebrates the 20th anniversary of Hubble’s launch and deployment into an orbit around the Earth.