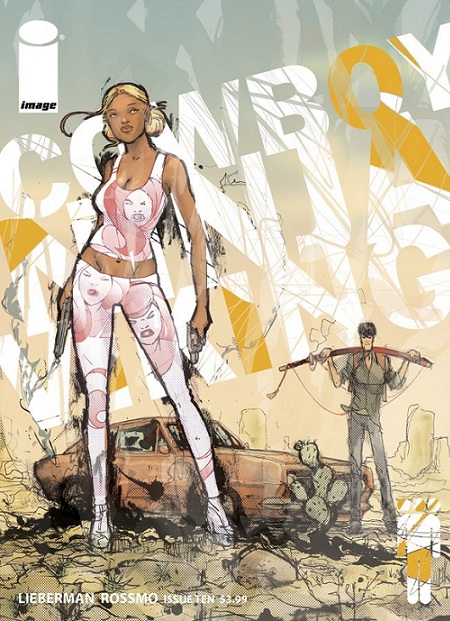 Just look at the title of this comic book – COWBOY NINJA VIKING.

Now try to convince me that you’re not interested. What’s that, you say it’s impossible? That’s right. Cowboys, ninjas, and vikings are all bad-ass in their own right and an unholy alliance of the three is nearly flabbergasting. In fact, I’m pretty sure that combining such potent staples of fiction is still illegal in the more fearful states of our union.

But I’m a bit of a narrative daredevil. As such, I look forward to partying with the COWBOY NINJA VIKING. 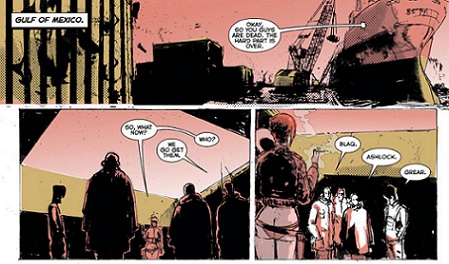 COWBOY NINJA VIKING is a series that I’ve been keeping an eye on for some time now. Again, I find the premising absolutely fascinating: referred to as Triplets, secret agents with multiple personalities harness their latent powers to assistant them on their (super)heroic quests. In addition to the titular character, some of the personalities vying for spotlight include a cook, a sniper, a karate student, and a roadie for `80s metal bands.

To be completely candid, I’m not 100% sure of what is happening in this comic. I haven’t read COWBOY NINJA VIKING since the sixth issue – purely because of my dwindling mental capabilities, not disinterest. With that being I am more than intrigued by what I can piece together. Different factions of Triplets, led by spooks I don’t trust, are competing with one another. In this episode, the two teams are fighting one another in the hopes of recovering a lost nuke. Gunfire and fistfights and stabbings ensue, which is unfortunate because the bomb is revealed to be a fake, entirely composed of the carburetor of a `78 Pinto.

But even though my own lack of attention is a disservice to AJ Lieberman’s (seemingly) wonderful script, I do not feel that even a single cent was wasted on this comic. Riley Rossmo’s artwork is more than enough to justify the four Ameros that left my wallet. The line art is sketchy enough to be refreshing but clean enough to maintain an elevated integrity. From my (untrained) perspective, I see an artist who has the technical proficiency that allows for superb panel layouts and a passion that that fills the page with genuine sentiment. 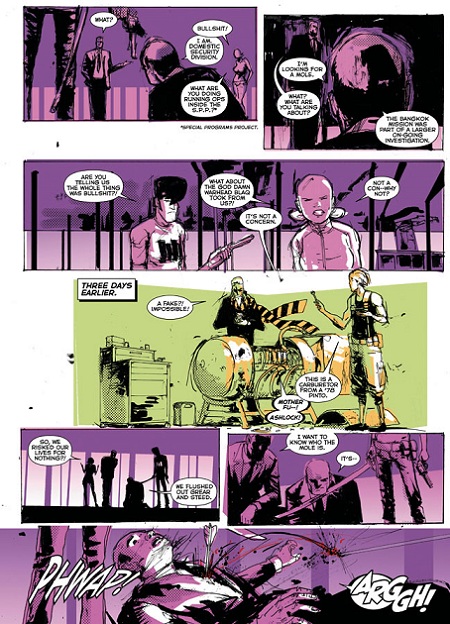 More specifically, I find myself drooling over the colors in COWBOY NINJA VIKING. On the one hand, Rossmo has no qualms about busting out light pastels that summon faint Easter memories. On the other hand, some pages are drenched in the vibrant shades that would otherwise offend – grape juice on the white carpet, so to speak. And Rossmo isn’t afraid to draw outside the lines, giving the distinct notion that wine very well might have been imbibed (and spilled) while working.

In our world, the colors are fading. But there are rebels. COWBOY NINJA VIKING is among them.

And for that, it should be praised.