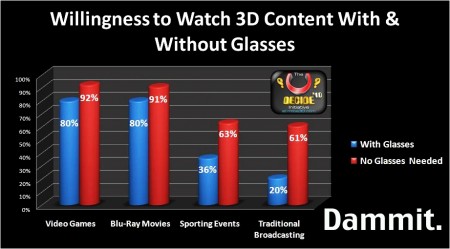 Well son of a bitch. No sooner do I post a poorly thought out and rushed rant about 3D gaming sucking rancid ass-breath, I come across a study that 80% of gamers are willing to use 3D glasses. Son of a bitch! Jim Sterling breaks it down.

According to a recent survey, 80% of people are willing to play games while wearing 3D glasses. This study contradicts previous polls which have always indicated an aversion to 3D glasses and a general indifference toward the technology in general.

Of those polled, 65% already owned an HDTV and 35% of them were planning to upgrade to a 3DTV. The survey was compiled by U-Decide, a company that specialized in surveying gamers to find out what they want. According to them, gamers want 3D.

Well then, what the fuck! Why am I surprised? Avatar made more money than god, and it just about kicked off this 3D craze that makes me want to puke blood and chunky bits of corn-based vomit all over my crotch. I need to shut my mouth though, since I’ll let you in on a secret: I enjoyed Avatar the first time I saw it. First time? Yeah, ’cause I actually saw it twice. Shh, don’t ruin my cred. The second time though? I noticed what I couldn’t when I was so bedazzled by the gimmick on the first time through. It was a cliched, slow-paced piece of crap.

So yeah, I was fooled, others were fooled, and we all love gimmicks. Fuck, I hate myself.