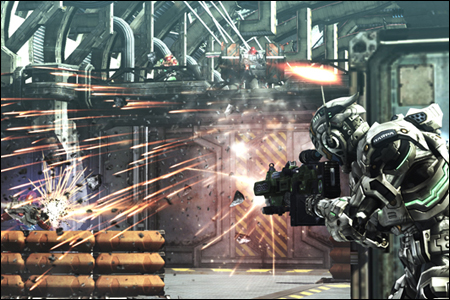 Oh god dammit. I was curious yesterday as to how my gaming schedule was going to look this Fall. I knew that Vanquish and Fallout: New Vegas were dropping close to one another. I just wasn’t sure how close. And that shit is integral for a variety of reasons. Namely, money and time. It seems like a lot of bullshit comes down to money and time.

So I cue up Gamestop.

Flip between the two pages.

And that’s when I realize that I’m fucking fucked in the fuckhole.

Son of a bitch!

Why do the gaming gods hate me so? Droppin’ two of my favorite games on the same day? Not only is it monetarily Super Rape Time to even contemplate getting the two games on the same day, but it’s also completely impossible to consider squeezing any sort of Super Action Mech Time into my Wasteland wandering. Son of a bitch!

But hey man, progress is slow.

Maybe it’s a blessing in disguise. Perhaps putting them together on the same day is going to allow me to realize I can’t play everything the day it ships. Specifically because it’s dropping on the same day as something else I covet. In the end I’m going to have to pass on Vanquish, it looks like. At least until later in the month, perhaps even Christmas! Oh Jesus Christ, it burns my finger tips even typing that. My Gaming Cred shrinks irrevocably with each time I share these thoughts with the world.

I cannot play every game.

I cannot play every game!

Maybe it’s a blessing in disguise. My classes start again in September, and if this didn’t happen, I would have tried to squeeze both games into my gaming diet. Unrealistically. You know, say Vanquish came out five days prior to New Vegas. No problem, I would have said! I can do it! At this point in my life I still can’t accept that I’m not the gamer I used to be. I don’t sit down for eight-hour stretches anymore like I did in college or high school. All night gaming sessions? A mirage, a totem of a childhood that has left me behind. I would have done the rough math, considered that I could beat Vanquish before New Vegas came out, and taken the double-plunge.

I would have failed.

This is what would have happened: I would have gotten Vanquish at midnight, played it for an hour. Spent the next five days in classes and doing homework, and then Fallout would have strutted onto the scene. I would have cursed, loudly. After that, I would have begun Fallout, and Vanquish would have sat unappreciated for anywhere between four months and a zillion years.

Anywhere between those two.

Some people get old and think they can still drive. You know, while they’re clipping little kids skateboarding too close to the street. Mashing little Tommy’s skull and board underneath a juggernaut of confusion and senile driving. I’ve gotten older and think I can still play everything under the sun! Because I don’t sleep! And I don’t do school work!

So maybe it’s a blessing in disguise. But I ain’t feeling that. Instead I’m feeling like I’m getting Chain-Raped by the Gaming Gods. Son of a bitch!