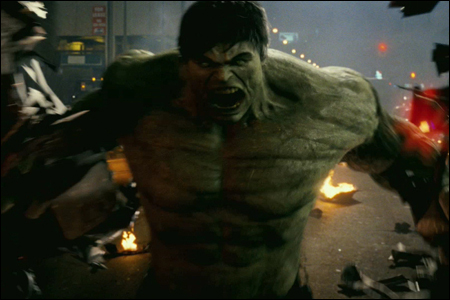 Over the weekend, it was announced that Edward Norton was not gonna be Brucey Banner no more. It was all totally contentious.

Our decision [to recast the role] is definitely not one based on monetary factors, but instead rooted in the need for an actor who embodies the creativity and collaborative spirit of our other talented cast members.

Then Edward Norton’s agent fired back:

Here are the facts:   two months ago, Kevin called me and said he wanted Edward to reprise the role of Bruce Banner in The Avengers.   He told me it would be his fantasy to bring Edward on stage with the rest of the cast at ComiCon and make it the event of the convention.   When I said that Edward was definitely open to this idea, Kevin was very excited and we agreed that Edward should meet with Joss Whedon to discuss the project.   Edward and Joss had a very good meeting (confirmed by Feige to me) at which Edward said he was enthusiastic at the prospect of being a part of the ensemble cast.   Marvel subsequently made him a financial offer to be in the film and both sides started negotiating in good faith.   This past Wednesday, after several weeks of civil, uncontentious discussions, but before we had come to terms on a deal, a representative from Marvel called to say they had decided to go in another direction with the part.   This seemed to us to be a financial decision but, whatever the case, it is completely their prerogative, and we accepted their decision with no hard feelings.

And what should have been a quiet weekend letting nerds like me jack off in peace turned into something interesting. I’m pretty bummed that Eddie is out. He’s one of my favorite actors, and the idea that I could have seen him and RDJ on screen at the same time was totally invigorating to my southern continent.

Today it came out that Joaquin Phoenix may be the dude to fill Norton’s shoes in the Avengers movie.

Reliable sources tell me that Marvel has already put out an offer, and the actor they’ve spoken to is Joaquin Phoenix, believe it or not. Phoenix is taking time to mull over the offer and the bigger implications – Marvel may yet resurrect the Hulk franchise – but Marvel hopes to have him in place by Comic Con, which is when they want to announce their new Bruce Banner.

Shit be percolating for sure. If Norton has to leave, why not cast someone who is bat shit crazy like Joaquin Phoenix? I’m sort of feeling it. Drop your thoughts in the comments box.