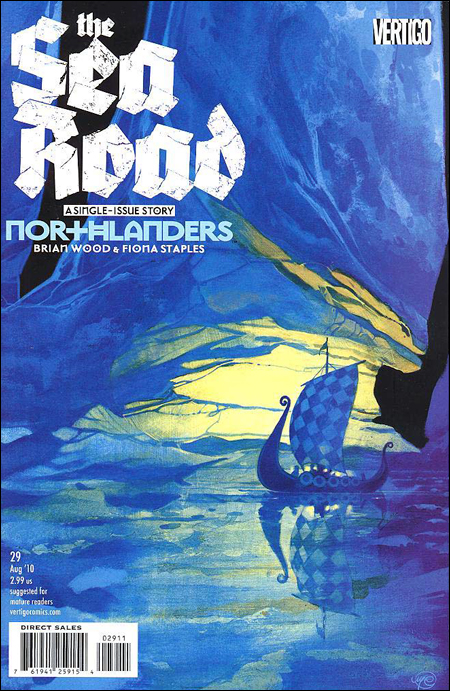 Karmic uppercuts be cemented in truth, Pepsibones the great has been banished from his own column. He saw fit to render me helpless and hijack Variant Covers on Tuesday, and for that I have returned the favor by supplanting him in this hypertextual mayhem. One column theft begets another!

Brian Wood’s Northlanders can probably sell you buying the comic on the concept of vikings, violence, and vulgarity alone. Furthermore, the fact that Brian Wood is writing the rag is motivation enough for me to read it. Wood’s DMZ is one of the densest, smartest comic books I’m digging on these days.

The fact that Wood brings his intelligent, witty, and darkly humorous notions of power and prejudice amongst other things to the world of swords and vikings? Fuck you if you’re not reading this comic book.

Which in fact, means, fuck me up until today.

Northlanders #29 is a stand-alone issue, which makes it perfect for douchebags like me. Having not read the title, but wanting to get into it, I’ve been holding off for a jumping on point! Splash, motherfuckers! Jump on in, the water is warm, with invisible pools of urine slowly floating your way. Shazam! Muwahaha. But no seriously, grab this issue and welcome to the world of Northlanders. You don’t need any pre-existing knowledge of the world.

The issue is narrated by the character Dag. Now, I don’t know Dag. And I’m pretty sure he’s a new character, but I could be wrong. But within a few pages, Wood has you firmly entrenched in Dag’s plight. It’s the sign of a dope writer that can get you invested in a character in a short amount of time. Anyone can generate sloppy issue after sloppy issue and facilitate some sort of illusion of depth. But Wood’s Dag is so god damn real from the beginning that you’re with the dude.

Most of that righteous bullshit is achieved through D-Boy’s internal monologue, which reads like some straight up sexy and darkly humorous prose:

My name is Dag. Just Dag. Who my kin are is of little use or influence out here. What makes a man on the sea road is bringing the cargo in on time, and not fucking over the hired help.

And like that, you’re off with Dag. On top of Wood’s dope narration, the artwork is fucking righteous. Staples’ artwork is crisp and simple. Her use of perspectives in her panels gives the dramatic moments gravitas, but what I dug most were her use of angles to convey confusion, pain, and other less than fun moments. Dag caved over facing the reader in an almost fish-eye lens motif was great. Especially since he had just gotten his ass whupped.

Dag’s golden ass-whupping came from decisions that lead to the centerpiece of the storyline: what constitutes success or profit. Dag’s a washed-up sailor guy, who has been riding the same mundane trade roots for years. Tired of the rat race, he sets his boys West. The great unexplored West. Naturally they don’t take kind to it, but Dag doesn’t give a shit. What follows is a beautifully bungling journey that ends in Greenland.

The story itself is interesting, but what lies underneath it rocks even more righteously. Dag and his crew fall before storms and divinity, watching a storm crackle in Iceland and finding themselves praying to the Gods. But Dag’s motivation is what really hooked me. As a crewmate Storri asks him, where is the profit in heading West to a new land?

Sure, Dag defends his ass by stating that new markets mean new goods, et cetera. Blah blah. Dag’s stunting. What he’s really feeling is the idea that profit and success aren’t tied directly together, that there has to be something beyond the earning of a cheap buck. Some pride. Something. Anything.

To watch Dag and his crew slowly unravel into madness and murder out of this simultaneously laudable and greedy move of our narrator’s is entertaining as fuck. And when Dag finally meets the natives of Greenland and they impale him, he leaves them with the foreboding message that there will be other people like him. The final page by Staples is hauntingly beautiful, as Dag meets his fate at the hands of the natives he wished to exploit for riches and acclaim.

The issue is fantastic, and god dammit, check it out. It works on so many levels, as single-issue journey, as a violent escapist work, and as an examination of life in what I guess could be called a capitalist market. It’s dope as fuck, and it’s got vikings. Shit’s simple.