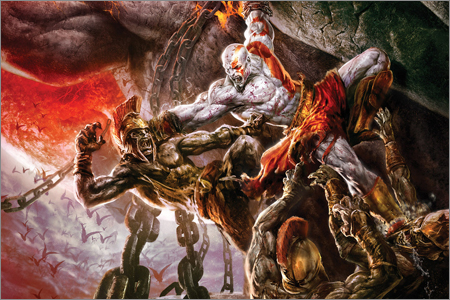 Here’s the thing about God of War III. As redundant as the generic gameplay can be sometimes, it always beats pushing around fucking blocks. I don’t know why they’re shoehorned into the game, but I fucking hate solving puzzles while I’m the god damn God of War. Most of the time my thought process is: I’m the fucking God of War, can’t I just punch through this door? Can’t I just fly up to the top of the ceiling? What the fuck is this bullshit?

Now don’t get me wrong, I like puzzles in games. Most of the time. But they feel so ill-fitting within the confines of our little Kratos experience. Not only do I find it implausible that Kratos wouldn’t just punch through someone’s skull as soon as push around and align crates, but they kill the pacing of the game.

You’re on a mission to kill Zeus. You begin the game by clashing with Poseidon. Epic shit is going down. And then twenty minutes later you’re trying to figure out how to scale the wall? What the fuck is this dog shit? You know what it is? Filler. It’s a bunch of bullshit filler that they’re using to pad the game’s length. I would have been happy to have a game that was two hours shorter, but much more tight and evenly paced.

I’m around six hours in, and after solving some retarded puzzle and being sent on yet another fetch quest, I decided I needed a break. Seriously Kratos, you have fucking wings, FLY UP THE MOUNTAIN and STAB ZEUS THROUGH THE TITS.