What the Fuck is Pepsi Max Cease Fire? 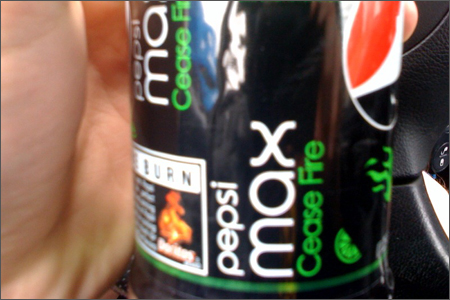 What the fuck is this shit?! I came across it today at my local 7-Eleven. I was heading for some sort of caffeinated beverage to get my synapses lubricated. Because, let me tell you something, my nickname on this site isn’t lying. I’m truly caffeine powered. Not like giggles and haha. I’m a fucking addict. If you spend more than three hours with me, you’ll see me polish off something like thirty ounces of caffeinated bliss. My friend Tom came over a couple of weeks ago to watch LOST, and he was like, you know what’s amazing? You’ve drank three Diet Mountain Dews since I was here.

And I was like, you know how we do.

So yeah, I saw this shit today at 7-Eleven, and I was like, what the fuck? I looked all around it, demanding an explanation. Pepsi Max Cease Fire. It’s Pepsi Max with a hint of lime. But instead of calling it something like Pepsi Max Delicious Lime, they had to make it sound masculine. CEASE FIRE. Also, it’s some sort of crossover with a Doritos brand Pepsi Co. is introducing or some shit. I was intrigued though. I mean, when you pound as much caffeine as I do, you’re looking for something new.

I pounded it and went about my day, and wasn’t reminded of it until Pepsibones and I went to get comic books. It was sitting there on my car floor, abused and alone and left for dead after I had sucked all the life out of it. I explained it to him, and he was like, how did it taste?

And I didn’t even know. It was at that moment, and I told him this, that I realized my tongue only tastes two things anymore: Caffeine Filled, and Not Caffeinated. Anything other sensations are beautiful subtleties that I lost to the demon I’m possessed by a long, long time ago.

Unless it’s the Purple Poison. Then we’re talkin.