Archives
« The People Vs. George Lucas Trailer Rekindles My Need for Therapy
Oscar Wao at the Front Register of B&N Makes Happy Time » 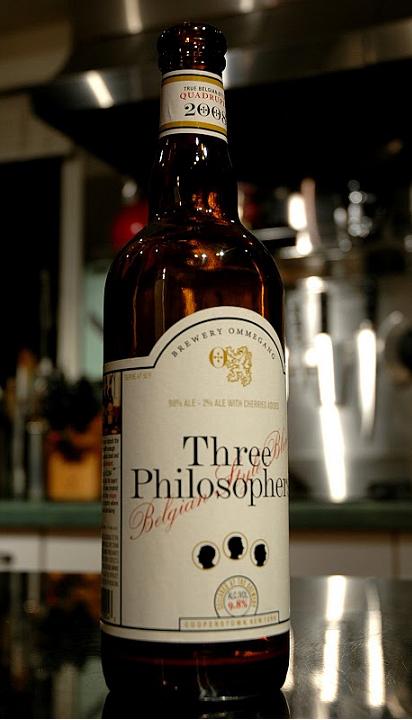 It was a fine afternoon in the autumn of 1946. The war was over and if you were a sailor you were guaranteed a piece of ass. Every night. These weren’t the worst of times, they were the goddamn best of `em. Don’t let anyone tell you otherwise.

Anyways, it was in a Brooklyn coffee shop that Socrates and Plato had their now infamous conversation about brewing beer. No, I won’t deny the fact that Aristotle was there too. But it’s important to remember that he was just tagging along. Had he not been Plato’s boyfriend, he would’ve never slimed his way into annals of the Drunken Kingdom. But the dude could smooch with the best of them, so he was there too.

Anyways, Socrates took a bite of his dessert, chewed thirty times on each side, and swallowed painfully. “Next time, I’ll make sure to avoid the broken glass pie,” the Greek mused. Turning to his business partner, he initiated the dialogue.

“Plato, I’m tired of being damn broke all the time. Why don’t we makes us some cash?”

“Doing what? You’re a janitor and I haven’t painted a portrait in years. Now that the war’s over, capable men are coming back home. We’re fucked.”

“Don’t be such a damn defeatist!”

Socrates and Plato sat in perfect silence, trying to come up with an idea. Flamboyantly, Aristotle ruined said silence with the more-than-suggestive slurping of his vanilla milkshake. He was really having at it, using his straw and spoon and even his fingers in the effort to get the cream into his mouth. Even Plato was disgusted.

“Well, let me ask you,” began the older of the two partners.

“Fuck off with your questions! Always asking those damn questions! They’re going to drive me fucking apeshit!” Plato was clearly frustrated.

“Hey, it’s fine if you’re mad at me. But don’t curse the questions.” In a single swoop, Socrates tossed the remainder of the broken glass pie into his chew-hole. He swallowed, once again painfully, and then continued. “Ok. Let’s be reasonable. What type of work should a man engage in?”

“Something that he’ll be passionate about.”

“And how can one predict whether or not he will be passionate about a future endeavor?”

“Well, if it’s an activity that one enjoys on a regular basis…” Plato paused, just to make sure he knew where his train of thought was headed. “Well, then said activity will probably be easier to be passionate about.”

Socrates smiled. He had taught his young partner well. “Agreed. So let’s figure this out – what is something that we both enjoy and are good at?”

Plato began, paused, began again, and then paused again. It popped right into his head and seemed like a great idea; yet something had held him back. Thinking on it for a moment, he realized that it was merely the fear of success. So he continued. “We’re really good at drinking beer.”

“Perfect! So now, instead of drinking beer, we will produce it…and then drink it!”

Their fate was decided. In a dingy Brooklyn coffee shop, Socrates and Plato made the decision to begin brewing their own beer. It was a business venture, sure. But it was also a worthwhile endeavor, helping people get drunk and forget their shitty existences for a few moments. The only hesitation was what type of ale they were to concoct.

Fortunately, Plato’s lover gave them the perfect inspiration. Jamming his long, scabby fingers into the ice cream dish, he grunted in frustration. Only for a moment, because he then retrieved the object of his desires. And, of course, he shouted triumphantly.

“The fucking cherry! I love cherries!”

And thus, Three Philosophers was born.

I cannot verify the total accuracy of the above story. But if I had to guess, I would say that it’s probably pretty close to how the Brewery Ommegang conjured up their Three Philosophers ale.

In any case, the Belgian-style cherry-Lambic is fucking tasty. Referring to the Engrish desk reference I keep on hand, I came up with this description for the brew: alcohol cherry yum-yum.

Three Philosophers is admirably well-rounded and even-bodied. The cherry notes really cut through, making for a sweet beverage. This sweetness helps curb some of the heightened alcoholic qualities, which made sure to land on my taste buds during the initial tasting. At nearly ten percent alcohol content, this Cooperstown product made the fuzzy bats in my brain fly just a little more recklessly.

The only potential concern with this beverage is that I was dominated by foam during my first pour. This could very well be more because of my ineptitude in pouring, but is worth taking note of nevertheless.

I’m not sure what the fuck happened to this week’s Friday Brew Review. Perhaps we’ll return to the normal format next week? Who fucking knows?

Three Philosophers is worth your dollar bills: B+