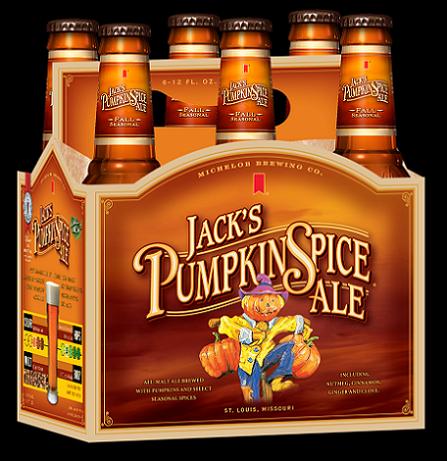 It’s Friday. Finally. TGI-fuckin’-F or whatever. If only it were 1989 again and I could rock the TGIF lineup, I may not have need to write this. But alas, times have changed and I can no longer rely on ABC’s transdimensional-series cameos to help kill the memories of the week.

Instead, I need a cold brew. And since I’m drinking anyways, I figure that I might as well take the opportunity to review the beverage for the six diehard, dedicated readers of OL.

So today I entered my local package store in the hopes of snagging something crafty, seasonal, and heavy. My eye was caught by the packaging of Jack’s Pumpkin Spice Ale. “Perfect,” I thought. “Ale is heavy, pumpkins are seasonal, and it looks like a homemade/craft/microbrew. Autumn RUleZ!!!”

Once home, I took a minute to actually look at the beer. “Wait a second…Michelob Brewing Company? Well, they’re not a craft distrib- fuck.” Okay, so I was scammed by the clever marketing of a beer juggernaut. Whatever — this doesn’t necessarily mean that the product is of a lesser quality.

After popping off the bottle cap, I poured the liquid into a glass and examined. Uh-oh. I could see right through, as though I had just poured a Bud Light. This kind of killed my hopes of drinking something heavier, but I wasn’t going to waste a perfectly good beer (or its five brothers).

The beer went down smooth…perhaps too smooth. Maybe I had too many preconceived notions going into this tasting, but it seems to me that something labeled Pumpkin Spice Ale shouldn’t go down faster than a bottle of G2 in the hands of a woman named Serena.

The verdict: I really like the cartoon Jack O’Lantern man on the label. Also, the ale smells really nice, like one of those Yankee Candles my mom is all about. And I suppose the fact that it is so fucking light will help put more in my gut. However, by taste it’s barely distinguishable from any normal light beer and it hasn’t inspired me to start putting up the Halloween decorations.

While not what I was originally looking for, I’ll award Jack’s Pumpkin Spice Ale: B –