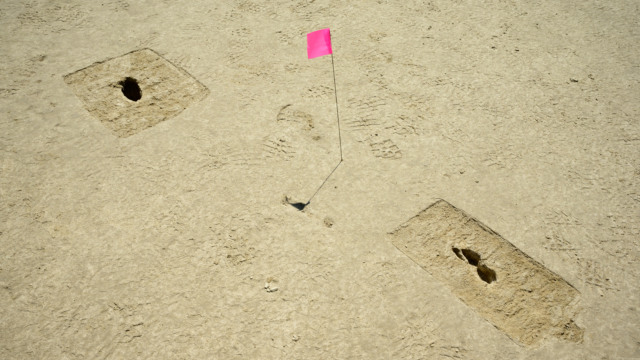 You: these ghost footprints are clearly the preserved 12,000-year-old footprints of ancient humans. Me, woke, brilliant: these are clearly the work of nearby skinwalkers. Whatever they may be, this is a fucking dope find by the Air Force.

Archaeologists working for the Air Force have uncovered evidence of early human life in the alkali flats on the Utah Test and Training Range (UTTR) in the form of “ghost” footprints that disappear and reappear.

The scientists have uncovered 88 preserved human footprints they believe date back 12,000 years, according to a Cornell University news release. They’re working to confirm the find now, and if the find is genuine, it would be the second discovery of Ice Age–era human footprints in the U.S.

The U.S. Air Force has been working with archaeologists to study various sites around the UTTR near the Hill Air Force Base for years now. “We found so much more than we bargained for,” Anya Kitterman, Hill AFB’s cultural resource manager, said in a press release.

In the distant past, long before it became a desert, the alkali flats were wetlands. “Based on excavations of several prints, we’ve found evidence of adults with children from about 5 to 12 years of age that were leaving bare footprints,” Daron Duke, the principal investigator of the site, said in a press release. “People appear to have been walking in shallow water, the sand rapidly infilling their print behind them—much as you might experience on a beach—but under the sand was a layer of mud that kept the print intact after infilling.”

Duke was driving with researcher Thomas Urban on their way to another archaeological site in the area when Urban noticed the “ghost tracks.” Such tracks only appear in the soil for a short time when moisture conditions are just right. The pair stopped to check the tracks and noticed the tell-tale signs of early human footprints. “It was truly a serendipitous find,” Urban told Cornell University.

There were dozens more footprints waiting to be discovered. Once Urban and Duke found the “ghost tracks,” Urban used ground-penetrating radar and found more footprints hidden under the sands. Duke and his team began careful excavations of the site and, so far, have found 88 total human footprints.

A similar site was discovered on the UTTR by Duke in 2016 about half a mile from the tracks. This is the hearth site Duke and Urban were traveling to the day they found the tracks. Back then, archaeologists pulled speartips and other hunting artifacts out of the ground. The scientists believed the weapons were used to hunt bison in the area thousands of years ago.

“We have long wondered whether other sites like White Sands were out there, and whether ground-penetrating radar would be effective for imaging footprints at locations other than White Sands, since it was a very novel application of the technology,” Urban told Cornell. “The answer to both questions is ‘yes.’”