Spotify expecting over 400 million users by the end of the year. Well then! 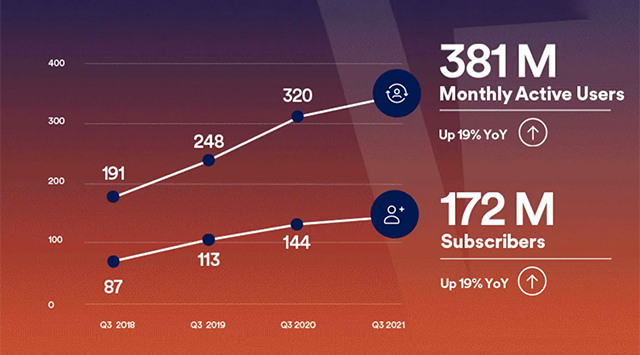 I don’t know why I’m covering this Spotify news that they expect to have over 400 million users by the end of the year. Not really in my wheelhouse, you know? But at the same time, I’m intrigued by our slow march towards intangibility. Everyone slough off physical encumbrances, all while I’m wanting to get more and more back into tangible media. It’s a weird time.

The growth means that Spotify continues to be the biggest music streaming service in the world. Although competitors Amazon Music and Apple Music don’t regularly release subscriber numbers, figures compiled by Music Ally put their subscriber counts at around 55 million and 60 million respectively. By the end of the year, Spotify expects to have in excess of 400 million monthly active users, and over 177 million premium subscribers, which is in line with previous projections.

Notably, this quarter saw Spotify’s average revenue per user increase to €4.34 (around $5.03), which is up from €4.29 (around $4.98) last quarter, and represents an increase of 4 percent year-over-year. Overall the company made a profit of €2 million up from a loss of €101 million in the same quarter the previous year. Both are relatively unusual for Spotify, given its emphasis on growth rather than quarterly profit or revenue. Average revenue per user has been helped by price increases from the company over the last year.

Earnings were buoyed by growth in podcast advertising, rising from 10 to 13 percent of total revenue, according to The Wall Street Journal. Spotify says that the amount of its users engaging with podcasts is accelerating, and that podcast share of overall consumption hours reached an “all-time high” this quarter. The amount of podcasts on the platform now sits at 3.2 million, up from 2.9 million at the end of the previous quarter. Spotify boasts that it’s now the “number one platform for podcasts that US listeners use the most,” citing its own data and a report from Edison Research.

The figures come at the end of a relatively quiet quarter for Spotify, which hasn’t been marked by any major acquisitions or launches. There’s also still no sign of Spotify HiFi, the company’s new CD-quality streaming tier announced in February that’s supposed to launch by the end of the year.

Instead the company has made more minor tweaks to its service this quarter, like widely rolling out the ability for podcasters to add interactive polls and Q&A’s to their shows, releasing a Wear OS app with support for offline playback, and adding a new “Enhance” feature that automatically adds songs to users’ pre-existing playlists.