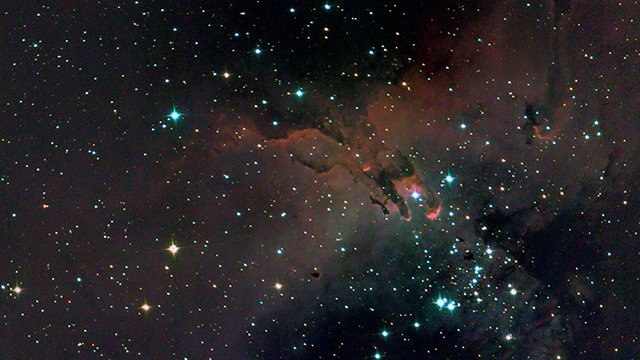 Where there’s a desire to study dark fucking matter, there’s a way! Need a better look at the Cosmos? Just launch a fucking helium balloon into space! Meet the goddamn SuperBIT!

A telescope carried by a massive helium balloon (it has a volume of 532,000 cubic meters, roughly the volume of a football stadium) will be launched into space in 2022 after years of research and testing to help solve one of the biggest mysteries in the universe.

The Superpressure Balloon-borne Imaging Telescope, or SuperBIT, is set to launch into space in April 2022 from Wanaka, New Zealand. It will be carried on “seasonally stable winds” as it travels around the Earth taking images of space for scientists to study, according to the press release.

The SuperBIT is able to capture high resolution, multicolor images using a cutting-edge camera. The telescope cost only $5 million to construct and operate, which is “almost 1000 times less than a similar satellite,” according to the press release. The telescope will also be helping to understand dark matter, a form of matter that physics tells us is there by its actions on celestial bodies but which scientists have never directly observed. SuperBIT will be investigating the properties of dark matter by observing whether dark matter slows down during collisions with itself. It’s designed to take images overnight and recharge during the day using solar panels.

Mohamed Shaaban, a doctoral candidate from the University of Toronto who led the telescope’s system integration, told Motherboard that the SuperBIT is a cost effective alternative that can supplement demand for the Hubble Space Telescope. Scientists are even hopeful that its cheap cost will make it possible to deploy a fleet of similar telescopes.

“Surely we can be viewed in many ways as a Hubble replacement, or a thing that will help once Hubble is out. But also, even if Hubble stayed forever, this is still a very crucial and urgent mission,” Shaaban told Motherboard.

The Hubble is one of the only telescopes with the kind of technology necessary to capture high resolution images, creating a high demand for its use that it cannot accommodate. However, it’s also going on 30-plus years and could run into trouble, for example the telescope was recently offline for a month before NASA could turn on a backup computer on board the device.

The SuperBIT is made possible because of NASA’s new ‘superpressure’ balloon technology, which can contain helium for months rather than just days, allowing the balloon and its payload to stay airborne for extended periods. The launch of the SuperBIT is one of the first times this kind of technology will be used.

The balloon is also far cheaper than using rocket fuel for a satellite, which has also allowed the SuperBIT team to test and retrieve the telescope over the years before its launch.

Shaaban shared that the SuperBIT team expects it to be in orbit for anywhere between 30 to 100 nights.

“It makes this quality of data significantly more accessible because not everyone can afford a billion-dollar mission,” he said.