Archives
« New Nintendo Switch with 4K Support and an OLED screen dropping this year. This is it, this is my time!
Weekend Open Bar: One-Year Strong! »

‘Party Down’ Season 3 Limited Series revival coming to Starz. I’m not sure if we’re having fun yet? 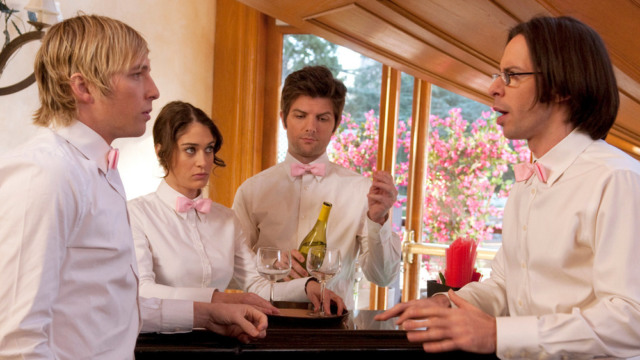 Man! Like, so fucking torn. Part of me is really stoked for a Party Down limited series. But at the same time? The ending to the show was fucking perfect. Perfect! Perfect.

Are we having fun yet? Because a limited series revival of the cult comedy series “Party Down” is being developed at Starz, more than 10 years since its second season wrapped on the network in June 2010.

Cast members have not been confirmed for the revival, though with plenty of fan support for the series, and a cast reunion hosted by Vulture back in 2019 which teased a possible third season, it’s likely some familiar faces will be back. The original series, which launched in 2009, starred Adam Scott, Ken Marino, Ryan Hansen, Martin Starr, and Lizzy Caplan as failed actors, dreamers, and underachievers moonlighting as mostly miserable cater waiters to the rich in Los Angeles, with Jane Lynch starring in the first season, followed by Jennifer Coolidge at the end of Season 1, and Megan Mullally throughout Season 2.

Each episode followed a day on the job, from a conservative caucus to an adult film awards after-party to Steve Guttenberg’s birthday party, and the various, often degrading and always painfully hilarious hijinks that followed.

“At the end of 2019, the ‘Party Down’ cast and producers were all reunited at a retrospective for the show hosted by Vulture. We had such a good time that we wanted to find a way to get the team back together again,” said series co-creator Rob Thomas. “The cast is so busy these days that finding a window where we can do it may require trigonometry, but we’re determined to make it happen.”

“Before the cast of ‘Party Down’ became well-known television and movie actors and award winners, they were all wearing the same pink bowties as part of a less than competent team of Los Angeles cater-waiters while chasing their dreams of stardom on the STARZ series,” said Christina Davis, Starz original programming president.

The limited series is produced for Starz by Lionsgate Television. Both seasons of “Party Down” are currently available for download or streaming via the Starz app. They’re also streaming on Hulu.