Archives
« HBO cancels ‘The Outsider’ but it’s shopping for a new home. The fuck, HBO?! The fuck, you people?!
Weekend Open Bar: The Cold War Is Heating Up Again! »

Marvel’s ‘WandaVision’ is premiering on Disney+ on January 15. About fucking time, man! 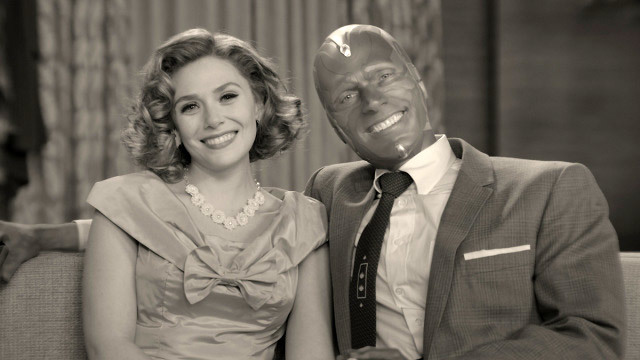 Listen, I fucking love The Mandalorian. But, I’ve been patiently sweating the Marvel drops on Disney+ for over a year now. Which means I’m pretty fucking torqued that WandaVision has a premiere date. January 15, bitches!

WandaVision, one of Marvel Studios’ most anticipated new series, finally has a release date: January 15th, 2021.

The news came ahead of Disney’s fourth quarter earnings call. Although WandaVision wasn’t supposed to be the first Marvel Studios show on Disney Plus, with The Falcon and the Winter Soldier undergoing reshoots and delayed to 2021, WandaVision was bumped up. The estimated date has gone back-and-forth, with some suggestion that it would premiere in December 2020. Now, it’s back to 2021.

WandaVision, which follows Wanda Maximoff and Vision from the Marvel Cinematic Universe films, is a fantasy series set within a sitcom-inspired universe. It’s a weird-looking show — one that was filmed in front of a live studio audience. Whether it finds a general audience outside of Marvel diehards (Wanda and Vision are great, but they’re not exactly Steve Rogers or Tony Stark) is unclear, but the show is arriving at the perfect time. With The Mandalorian’s second season up and running, Disney is looking for new anticipated series to keep people from canceling their subscriptions. WandaVision could be that show — and may lead directly into The Falcon and the Winter Soldier.