Archives
« The Japanese military has announced it will track UFOs. The truth is fucking out there!
NASA finds evidence of “fresh ice” on Saturn’s Moon Enceladus! God bless the Snowball Moon! »

Tatiana Maslany has been in lead role ‘She-Hulk’ role for Marvel series. I can dig it, comrades! 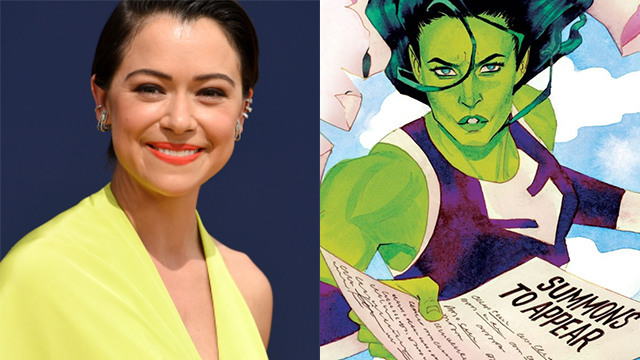 Tatiana Maslany was pretty fucking rad in Orphan Black. So, I got absolutely no problem with her being cast as She-Hulk in Marvel’s upcoming series. In fact, this casting gets me giving a fuck about the series.

EXCLUSIVE: After tapping Kat Coiro as director, Marvel Studios looks to have found its star to take over the title role in its She-Hulk series. Sources tell Deadline that Orphan Black star Tatiana Maslany is the choice to play the title character in Marvel’s She-Hulk series for Disney+. Deadline broke on Tuesday that Coiro would direct several episodes, including the pilot, for the series and now the show has its actress for the highly coveted role.

Rick and Morty writer Jessica Gao has already been tapped to lead the writers room.

The last major character to be co-created by Stan Lee, She-Hulk is Jennifer Walters, an attorney and cousin of Bruce Banner, aka The Hulk. An emergency blood transfusion from her cousin gives Walters her powers, but unlike Banner/Hulk, She-Hulk was able to keep her intelligence and personality when she Hulked out.

The project is just one of a handful of anticipated series Marvel Studios is working on for Disney+, with The Falcon and Winter Soldier, WandaVision and Loki all in production and set to bow in the next year.

Maslany also becomes the latest female talent to lead a Marvel project following in the footsteps of Brie Larson in Captain Marvel and Scarlett Johansson in the upcoming Black Widow movie. Marvel head Kevin Feige has made it his mission to diversify the MCU and this latest addition to the universe does just that.

Best known for her Emmy-winning role in Orphan Black, Maslany is coming off her highly-lauded role in HBO’s Perry Mason opposite Matthew Rhys. On the film side she has been seen in the Lionsgate pic Stronger and Destroyer. She appeared on Broadway opposite Bryan Cranston and Tony Goldwyn in 2018’s Network.

She is repped by ICM Partners.

UPDATE: Shortly after Deadline’s story on Tatiana Maslany’s She-Hulk casting was published, it was retweeted by Mark Ruffalo who plays The Hulk in the Marvel Cinematic Universe. He gave Maslany a warm welcome.