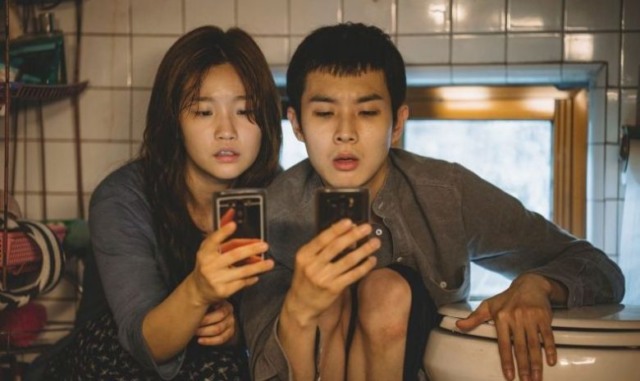 Adapting Parasite for an HBO limited series? Sounds like peak Hollywood. Getting its fangs into a foreign hotness. Lame. But! Wait! Bong Joon Ho is involved? Okay, okay. Now, I’m a little intrigued.

Talks are underway with the pay cabler, which came out on top of a bidding war with Netflix for the rights.
Parasite, one of the most acclaimed movies of 2019, is heading to HBO as a limited series.

Deals are not done, but talks are underway with HBO, which came out on top following a fierce bidding war with Netflix for the rights.

Parasite followed the poor but cunning Kim family as they ingratiated themselves into the lives of their wealthy employers, the Park family. The relationship between the two clans went through several twists and ultimately ended up having deadly consequences. It is unclear if the limited series will be some sort of follow-up to the movie or an English-language remake.

The Korean film, seen as a take on class warfare as well as a genre thriller, has earned more than $23 million at the domestic box office and a massive $130 million globally. A possible best picture Oscar contender, the movie has already racked up other awards, including Sunday’s Golden Globes win for best motion picture — foreign language. Parasite also was recently named best picture of the year by the National Society of Film Critics and appeared on many top 10 lists.

Bong is the filmmaker behind such other movies as Host, Snowpiercer and Okja. His previous feature film, Snowpiercer, is being adapted by HBO corporate sibling TNT as a drama series, though Bong is not attached. The series has been in the works for more than four years and has already changed showrunners, directors and networks. A premiere date has not been determined for the long-gestating series.

This is McKay’s latest scripted venture at HBO, joining Succession and the recently ordered 1980s-era Los Angeles Lakers drama series. He’s also prepping a limited series focusing on Jeffrey Epstein as part of his rich five-year, first-look deal with the premium cable network. McKay has a long history with HBO, having worked on series including Eastbound & Down and Funny or Die Presents.