Leaked: ‘Assassin’s Creed: Origins’ is next game in series, set in Egypt 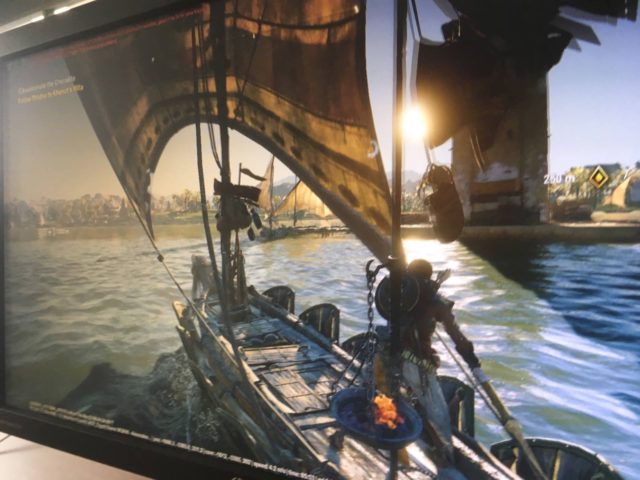 The next Assassin’s Creed title will be a prequel called Assassin’s Creed: Origins set in ancient Egypt, according to a leaked image of the game corroborated by Eurogamer as well as other media reports.

Earlier today, a now-deleted Reddit account posted the image above to the Assassin’s Creed subreddit as “your first look at Assassin’s Creed: Origins.” It appears to be a photo of a computer monitor running a development build of a game in which a character is standing on a wooden sailboat. A bow and arrow, as well as a shield, are slung across the individual’s back. It was possible to raid boats in the previous game, 2015’s Assassin’s Creed Syndicate, but the last mainline entry in the series to allow players to pilot boats was 2013’s Assassin’s Creed 4: Black Flag.

The main objective is telling the player to “assassinate the Crocodile,” while the currently active goal is to “follow Shadya to Khenut’s Villa.” Crocodiles played a prominent role in Egyptian life — the Nile crocodile was a dangerous predator, and the Egyptians immortalized it in their mythology with Sobek, a protective but aggressive god associated with military might and fertility. Khenut was an Egyptian queen who lived during the Fifth Dynasty, which ran from about 2494-2345 B.C.

Assassin’s Creed is one of the leakiest franchises in gaming, with details of upcoming entries in the series frequently revealed before publisher Ubisoft officially announces them. Kotaku reported in January 2016 that Assassin’s Creed was taking the year off and would return in 2017 with a game codenamed Empire set in ancient Egypt; Ubisoft confirmed the hiatus a month later, but has not yet commented on the setting.

Last week, WWG reported that the 2017 title was now called Origins, and that it would be a prequel that would bring back Black Flag’s naval combat. Eurogamer, citing three independent sources, said today that it has confirmed WWG’s report of the name: The game is called Assassin’s Creed: Origins and will be released later this year on PlayStation 4, Windows PC and Xbox One. Eurogamer did not confirm the Egyptian setting, but said that its three sources said the leaked image is legitimate.

We don’t really know anything else about this year’s Assassin’s Creed title that’s concrete. However, a Ubisoft executive said in November that the game would focus on giving players a less scripted narrative and allowing them to tell their own stories within the game world. You can see the full leaked photo below. We’ve reached out to Ubisoft for comment, and will update this article with any information we receive.