Archives
« Beyond Good and Evil 2 Confirmed: It’s in development, according to Ubisoft
Views From The Space-Ship: The Doggo Days of Autumn » 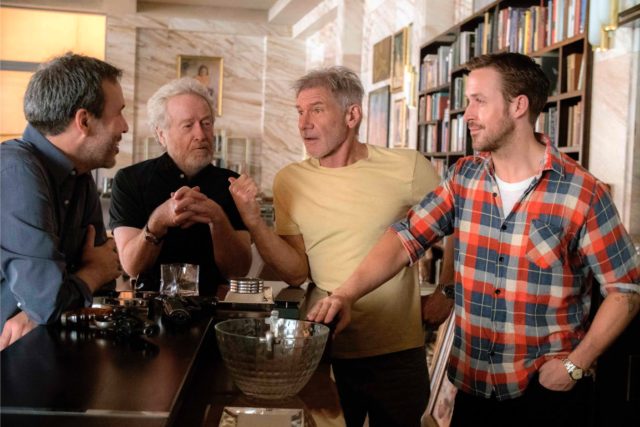 The creative team behind Blade Runner 2 has released its official title, as well as an official “set photo” for us all.

Alcon Entertainment’s Blade Runner sequel is only a year away from release and Warner Bros has finally announced a proper title for the film: Blade Runner 2049. Hit the jump to learn more and see a photo from the set featuring director Denis Villeneuve, producer Ridley Scott, and stars Harrison Ford and Ryan Gosling.

The original 1982 film Blade Runner was set in the year 2019, so it looks like this sequel will take place exactly 30 years later, which makes sense as Ford had aged three decades in that time. Warner Bros has released the following set photo featuring director Denis Villeneuve, producer Ridley Scott, and stars Harrison Ford and Ryan Gosling on the set of BLADE RUNNER 2049. We can’t determine much from this official set photo, but you will notice blasters on the table and the architecture of the room looks like the art deco-style that was used in the original film.

Denis Villeneuve has said that this sequel is “not possible to live up to the original” acknowledging that Ridley Scott’s film is “a masterpiece.”

“It’s one of the best sci-fi films, one of the best films in the past 50 years. For me, what terrorises me right now is what I’m doing is taking Blade Runner and making it my own, and that is horrific.” … “To realise that when I look at the dailies, it’s not Ridley Scott, it’s me, and that it’s different. It’s still the same universe, we are still in the same dream, but it’s mine, so it’s like I have no idea how you people will react, I don’t know. It has its own life.”