Archives
« Views From The Space-Ship: As Above, So Below
‘Free Fire’ Trailer: Brie Larson Has That 1970s Gunplay Swagger » 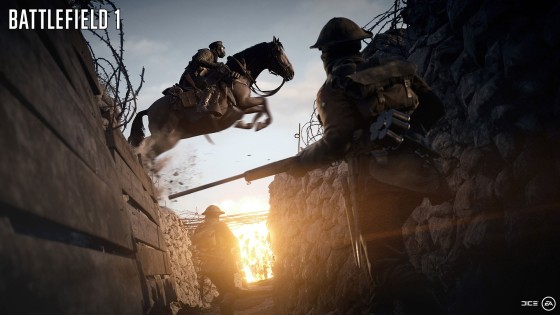 Battlefield 1. Got everyone excited. Even me, and I don’t typically fuck with FPS titles outside of Call of Duty, and Borderlands, if that counts. Now, now — I didn’t play the beta. But a lot of people did. A lot.

The figure includes players from all three platforms on which the beta was available: PlayStation 4, Windows PC and Xbox One. EA DICE ran the beta for 10 days, from Aug. 30 to Sept. 8.
Battlefield 1’s open beta beat out the previous record-holder at EA, the beta for Star Wars Battlefront, which pulled in more than 9 million players last October. It may even be the biggest beta of all time, easily surpassing the likes of Blizzard Entertainment’s Overwatch (9.7 million players), Ubisoft’s Tom Clancy’s The Division (6.4 million players) and Activision’s Destiny (4.6 million players), although EA hasn’t confirmed that. (Activision said the multiplayer beta for Call of Duty: Black Ops 3 last August was the biggest in PS4 history, but the publisher never announced player counts for that platform or any other.)

Now, with just over five weeks to go until the public launch of Battlefield 1, developer EA DICE is incorporating player feedback from the beta into the final game. For instance, said senior producer Aleksandar Grøndal, the studio will nerf the light tank.

Battlefield 1 is set for release Oct. 21 on PC, PS4 and Xbox One, although people who pre-order the game’s $79.99 Early Enlister Deluxe Edition will be able to start playing three days early. For more, check out our impressions from Gamescom.