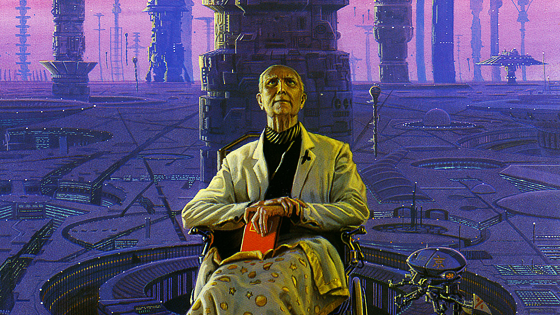 Pessimistic opening: Here’s hoping Johnny Nolan is less of a preachy, ham-fisted pedant while working on his next space opera. Optimistic opening: Fuck yeah! Jonathan Nolan is teaming up with HBO to bring Isaac Asimov’s Foundation book series to the televisor. All Space Opera Everything! Everywhere!

It looks like HBO is teaming up with Interstellar writer and Person Of Interest showrunner Jonathan Nolan to adapt the highly revered and beloved Foundation books into a TV series. Wow.

The Wrap is reporting that Jonathan Nolan will be working with HBO for yet another series. The Interstellar writer is currently working on a TV adaptation of Westworld for HBO, and now he has allegedly turned his attention towards the groundbreaking work of Isaac Asimov’s Foundation.

This is happy news, as Foundation was once set to be adapted into a film by Roland Emmerich.But Foundation is a pretty seminal work of science fiction, so needless to say we’re pretty nervous. HBO will be teaming up with Warner Bros. TV in hopes of producing a series. No word on how many episodes this “series” will contain or if it will be set up as a miniseries, however the books have enough material to last a very long time.

Seriously though — I thought Interstellar was a C+ movie with A+ visuals, and most of my complaints stemmed from a problem I’ve had with the Nolans for years. Heavy exposition, not-so-subtle shoving of themes down people’s throats. These faults just ran amok more than usual. But at the same time I can appreciate the scope and the sheer desire to say something that came from the movie. So I’m pretty fucking stoked that Jonathan Nolan is bringing another space opera to life. Let’s do this.