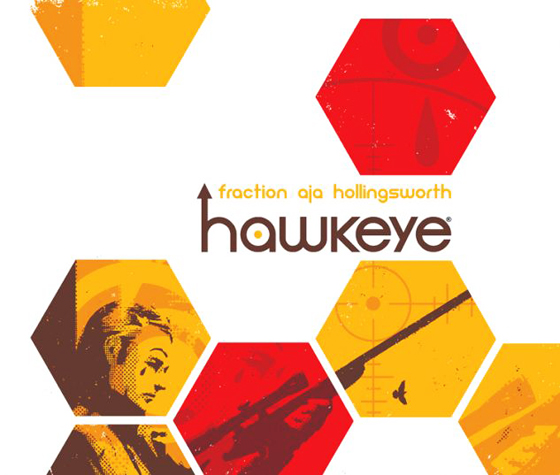 Some folks, after a huge critical and creative success, are content to rest on their laurels.  Some winners are one-and-done, fading back into the heaping middle of mediocrity with the rest of the world.  But for creators Matt Fraction & David Aja, fresh off of their 2014 Eisner win for “Best Single Issue,” laurel-resting is not an option.  Step inside and let’s talk about another landmark issue of a book destined to be talked about for years to come, an issue that is a storytelling force of nature, and one that puts a target on other creators’ backs.  And peeps, lemme tell ya – Hawkeye never misses.

A full list of this week’s comics can be found right HERE. 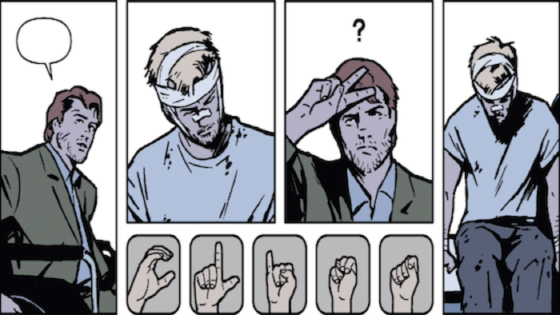 OMEGA-LEVEL Book of the Week!

We certainly aren’t the first site in the ‘verse to cover this issue, nor will we be the last.  This is an issue that will be studied, lauded, and pored over for quite some time.  It is the much-publicized “deaf” issue, and it is every bit worth the considerable amount of hype it’s been given, and it can be praised for any number of reasons.  First, it deals with a superhero coping with very real physical limitations in an interactive way for the reader.  David Aja’s cartooning skills (and Matt Fraction’s ability to let Aja’s art do the speaking for him) are put to the test, and pass with flying colors.  Though certain parts may be challenging for the ASL-newcomer, Aja’s ability with body language and facial expressions make those moments easier to overcome.  Second, again let’s pause and be in awe of Aja’s deftness with the language of cartooning – again and again throughout this issue he focuses on just the right emotion or action at just the right angle, his eye for direction and style are unmatched certainly in modern superhero comics, and maybe even the entire medium.  Last, lets all marvel at the fact that is is going on in a mainstream superhero funnybook.  This is the kind of book that shows us how far we’ve come in modern superheroics, and the kind of diverse storytelling available to a genre that at times can seem devoid of any new stories.  While the plot to this comic may feel comfortably familiar, Aja and Fraction adapting an entire language for the issue gives it such a fresh and unique approach that it only makes the reading experience richer, and more alive that superhero comics have felt in quite some time.  Also to be appreciated in this issue, maybe lost in the thrust of the plot and the dynamics of the storytelling, is a very tender (in a brutal kind of way) story of brotherhood that really connected with me – how siblings shape each other and help raise each other up in ways that parents cannot – only added to the overall rewarding read.  This book will stay with me long after the series is done, another home run from a team (that includes dynamic colorist Matt Hollingsworth and stalwart letterer Chris Eliopoulos) that has an incredibly high slugging percentage. 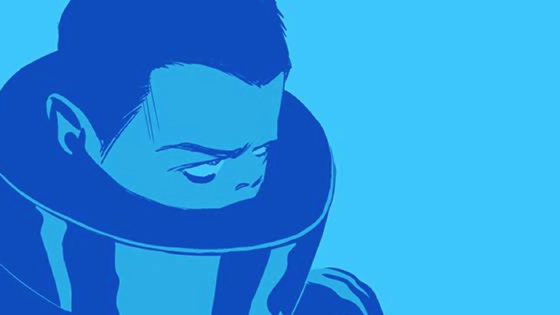 I’m trying to decide if East of West is Hickman’s allegory on unchecked power being the cause of of a society’s downfall, or that love is the most devastating form of power imaginable, or if he just wondered what would happen if JRR Tolkien and Philip K. Dick got together after LotR and Man in the High Castle and wrote some alt-history-porn together.  East of West is an epic, brutal sci-fi Western, and the world-building involved is just fascinating to behold.  Being the curious cuss that I am, I would LOVE it if the eventual hardcover collecting this series had some pages of Hickman’s notebooks thrown in.  I’m sure they’re extensive.  Hell, I bet Hickman even has a Stannis Baratheon-like huge table with his East of West-world carved into it, moving pieces across it in a chess game only he knows the outcome of.  Yep, that’s headcanon, now.  Anyways, but this book! 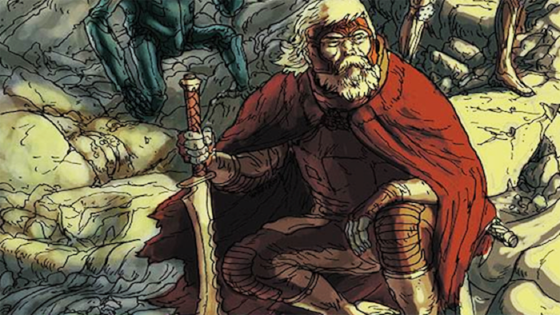 Welp, this a’ here issue bout wraps er up.  All she wrote, and all that.  Brandon Graham’s epic story of a very non-Extreme Studios John Prophet (still a bunch of pouches, but put to better use) in our far-flung future comes to it’s conclusion.  Wait?  There’s more?  YISSSSSS!  Though this issue is the final of this series, Graham isn’t done with the character, or the saga of said character.  To be continued in a mini-series called Prophet: Earth War, so all is not lost!  This series has been a nose-bleed of a series, bending my mind while at the same time giving me an action packed trip down memory lane (but in futurespace…don’t ask me how that works) with Liefeld’s old characters.

That’s going to do it for me this week, but I KNOW that there were several more releases this week worth talking about, so don’t be afraid to do so in the comments below.