First ‘GUARDIANS OF THE GALAXY’ plot summary drops. I am ignorant to this universe. 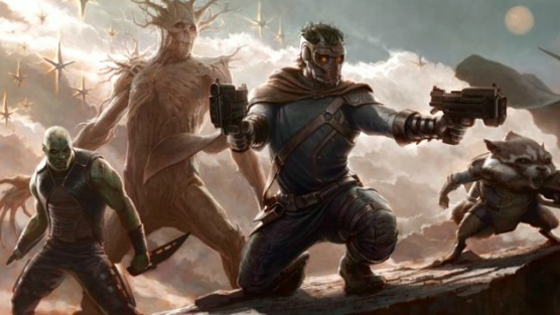 Reading through the plot description for Guardians of the Galaxy, I have arrived at several realizations. First, this sounds a hell of a lot like Green Lantern. Second, I have no fucking clue about anything regarding the Guardians. And I do know, is that Marvel is going to have quite the interesting time marketing this pig.

Both Production Weekly and On The Grid have a short description of the mysterious Marvel project that runs as follows:

About a U.S. pilot who ends up in space in the middle of a universal conflict and goes on the run with futuristic ex-cons who have something everyone wants.

For old-school fans of the Guardians, the “U.S. pilot” would apparently refer to Vance Astro, who – in original Guardians lore – was an American pilot who spent ten centuries in space as part of the first manned interstellar mission, only to find himself not only a futuristic Captain America-esque Man Out Of Time but also super-powered as a result. However, it’s possible that the description refers to Peter Quill of the more recent incarnation of the team, who was also an astronaut with NASA as one point in his past. It’s worth noting that someone wearing Quill’s “Star-Lord” outfit appears in the released concept art from the movie, but for all we know, that could be Astro under there, or some character who’s a combination of the two.

Also worth pondering: What is the “universal conflict” referred to (Presumably something including Thanos, surely), and what is the “something everyone wants”? I know that everyone in the real world wants their own Rocket Raccoon, but I doubt the movie will be quite so clearly aligned with the audience in that respect. Of course, looking for answers to those questions right now may be a somewhat fruitless quest; the movie is still being written, with Chris McCoy only joining the project as screenwriter two weeks ago. Maybe even he doesn’t know what that something is just yet…