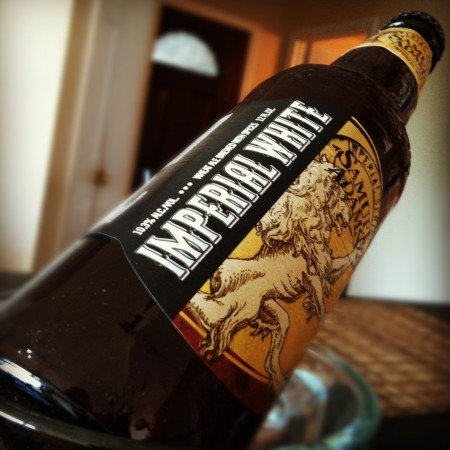 Today is Friday. As such, I’m drinkin’ beer. And while I normally use this weekly inebriatory-ritual to seek out potions by breweries foreign, enticing, and sometimes entirely alien to my palate, today’s beer-drankin’ is goin’ to be an exception.

After all, I’d be remiss to not follow the advice of my good friend Grandeur Faex.

Grandeur Faex was a dude I used to work with at the post office. He was older than my grandfather but still alive, drunker than my dad but twice as strong, and funnier than my brother but more diseased. Mostly venereal. Also, he regularly made claims that he came from a utopia-future in which sex was currency and everyone was a millionaire.

With these credentials, it’s not hard to believe that Grandeur proved to be an indispensable dispenser of advice. One afternoon, upon noticing that I wasn’t sorting mail with my usual panache, the old pervert wrapped his arm around my shoulder and began spouting out some words of wisdom. Totally unsolicited, of course – but I always open to getting some guidance from a self-proclaimed time-traveler and state-proclaimed maniac.

“M’boy, you ain’t got no soul today! Bones? Guts? Fat sack of shit in your gut? Sure. But no soul! You done broked, huh?”

I look at him and laughed. “Yeah, I guess I’m feeling a bit down today.”

“H’ain’t no worries, son!” He matched my chuckle with one of his own, except that his had more black abscesses than teeth. “Lemme give a wordda wisdom – when life gets you down, yagutta go to the stuff that yaknowle makkya happy! Your favorite pop song. Your woman’s bosom. And, most especially, a beer that you trust.”

Finding myself at the end of an incredibly overwhelming workweek, I’ve decided to follow the instructions of Grandeur Faex. Rather than seeking out a beer by a brewery I’ve never heard of, I’m diving into the deep end of my comfort zone. Today, I’m drinking Imperial White from the folks at Sam Adams.

Before I started consumin’, I wanted to see what the brewers had to say about their product. Check out their words:

A new perspective on the classic witbier style.

Samuel Adams ® Imperial White represents a new perspective on the classic witbier style.   Witbiers are normally light and refreshing with a fruity finish.   We wanted to see how these characteristics would stand up when we amped up the recipe and we were totally blown away by the flavors that were created in this beer.

Sounds sick. Again, since I’m obeying the laws of Mr. Faex, I don’t need to be sold on the beverage. But it’s nice to know that the pitch on the website lines up with what I’m lookin’ for.

After pouring Imperial White into an over-sized glass mug that no barkeep or beer-snob would ever suggest using, I gave an ocular assessment. This stout is a rich shade of orange and hazy as the swamp water my brother tried to drown me in. As the creamy head dissipated, I came to the conclusion that this beer looks just like pumpkin soda would look like if life were really a Roald Dahl story.

Smell-wise, this Sam Adams imperial is fragrant and sweet. As I sniffed, I picked up traces of citrus amidst a heavy breath of alcohol – there’s no doubtin’ that Imperial White touts an elevated ABV of 10.3%. I’d like to tell you about all sorts of other scents that I detected, but my olfactor was thrown off by my mucus-laden schnoz. Gross.

Okay, so how did Imperial White taste on my tongue? Damn good! Not unusual for imperials, there is an overarching breadiness that ties together the narrative of this beer experience. With that said, I also greeted the appearance of orange zest and lemon peel with high-fives and bro-hugs. As I continued to sip, there were spices coming to the forefront and then receding into the shadows, but I’m not sure which ones. I also could’ve sworn that I tasted the most hidden intimations of caramel, but I don’t think I’d like to be quoted on that.

In terms of the body, I’d say that this concoction is ideal for it’s dark intentions. There is enough of a syrupy consistency to prevent the drinker from shotgunning this highly alcoholic brew, but it’s still light enough to imbibe without getting full. There’s a light carbonation, which helps entertain the tongue and gums and teeth without being confused with soda pop. Additionally, the elevated ABV is responsible for a warmth in the belly that is really appreciated while drinking with the windows open.

So what’s my verdict? Well, since I followed the advice of the inglorious Grandeur Faex, I picked a beer that I be prejudiced towards – and I loved it! Imperial White is what all beers should aspire for, a greatness of body and scent and taste that is ever-elusive but never-disappointing. This beer kills.