Archives
« China Is Sending Astronaut To The Moon. America? We Got Awesome Reality TV!
I WANT TO BE DEAD WITH MY FRIENDS. » 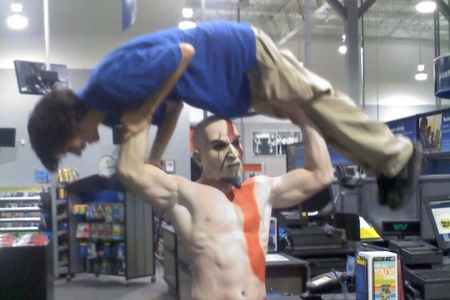 God of War III. Didn’t really do much for me. Aside from the whole “punching Zeus in the face a thousand times because I’m a blood-thirsty asshole” moment. According to a game composer’s resume, God of War IV is coming and this shouldn’t be terribly surprising. The series has made (according to my calculations drunkenly mashed out on a solar powered calculator) three-gajillion dollars.

According to the resume of composer Timothy Williams, the  God of War  series will continue with  God of War IV, and he’s supplying the tunes. The game was spotted on Williams’ listed projects, and a whirlwind of giddy speculation has swept cleanly through the Internet since.

This isn’t the first bit of  God of War IV  news we’ve seen. Almost exactly  two years ago, the game was mentioned, and more recently  PSM3  claimed  it would arrive this year, with co-op included.

All signs point toward this game being real, but that’s hardly surprising considering how popular Kratos’ violent exploits are. Expect this new dribble to become an outpouring in the run up to E3.