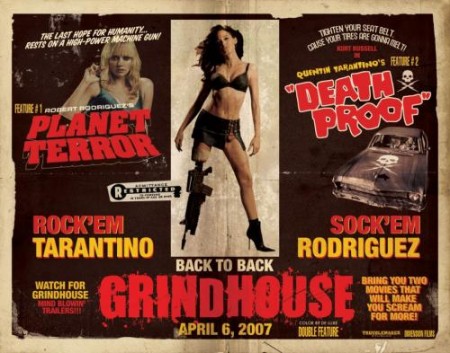 As you no doubt know, OCTOBERFEAST is the annual celebration of shock-and-awe entertainment, those dastardly bits and pieces that we can’t help but love with mouths agape and eyes closed. The same way that cavemen would streak past brontosaurus nests for cheap thrills, we need to scare ourselves silly sometimes. And to do this, we watch scene after scene of gruesome murders, horrifying mutations, and savage acts of violence.

Again, the reason we meet year-after-year to celebrate this tenth-month carnal carnival is the fact that there are deep-seated desires in all of us to explore the sweet ugliness. Unfortunately, there are those that think indecency has no place in entertainment. That depictions of decapitation are in poor taste. That zombie movies are not only insidious but also trite. Hell, this moral imposition isn’t a new idea, but the self-righteous are proliferating at unprecedented rates.

Fortunately, there are heroes amongst us.

In 2007, Robert Rodriguez and Quentin Tarantino teamed up for the exploitation-throwback Grindhouse. This double-feature consists of two original flicks shown back-to-back which are also accompanied by faux-trailers. If nothing else, the experiment was a deal for the fans just in terms of economics: one regularly-priced ticket granted a viewer access to far more material than that which is provided by any standard flick.

With that being said, Grindhouse is also a horrific tour-de-force, a masterpiece for those who love blood and guts and gore and camp.

The first entry in the two-movie feature is Rodriguez’s Planet Terror. This flick is an over-top-zombie flick that sees Rose McGowan stealing the show not only with her scantily clad body, but also her firearm leg prosthesis. There’re gross-out moments with zombies exploding, laughs-a-plenty with some characters being more concerned with BBQ recipes than the end times, and conveniently missing reels. To top it all off, the movie has Bruce Willis.

On the other hand, Tarantino’s Death Proof presents a brand of terror that is more grounded in its intentions. This second flick sees Kurt Russell playing Stuntman Mike, a washed up stunt driver longing for the glory days of Hollywood during which the stunt people reigned supreme. To get his kicks now that he’s been replaced by CGI, Stuntman Mike offers hot babes rides in his car. Of course, there’s a catch: Mike’s stunt car is completely death proof for the driver, but nearly guaranteed to kill a passenger if it crashes.

Which it does. Because that’s what Stuntman Mike wants, and he gets what he wants. That is, of course, until he runs into a pack of bad-ass bitches that don’t take shit from anyone, including maniacs with film-industry experience.

Grindhouse is a rare treat, as it knows exactly what it is and revels in it. Tarantino and Rodriguez manage to simultaneously poke fun at the conventions of classic grindhouse flicks while paying homage and revering them. Additionally, clocking in at just over three hours, this cinematic collection is the perfect accompaniment for a cold, dank OCTOBERFEAST eve.