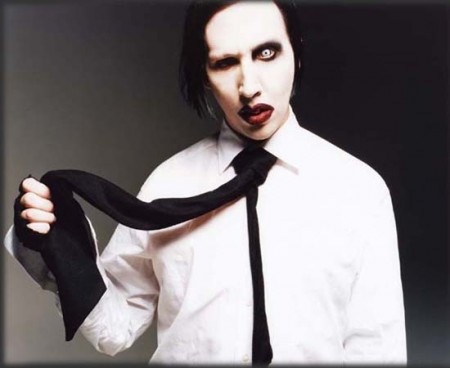 Most of the year, society politely asks its freakazoids and dweebies to shut the fuck up. To stay in the shadows. To look at the ground when walking. To never – ever – look an authority figure in the eyes.

From the ash-heap cinders of incendiary ostracization is born the Weirdo-Phoenix. LAN-parties and midnight movies and D&D basement gatherings and comics conventions? The nests of the Weirdo-Phoenix, the few designated safety-zones in which it’s okay to not fit in. In which it’s okay to debate whether orcs or Skrulls are more formidable foes. In which Dew flows like wine. In which the familiar themes of fantasy and sci-fi and horror are life philosophies.

Needless to say, OCTOBERFEAST is the absolute Mecca for gawky misfits.

So who is the resident misfit at the `Feast, the seasoned kook who can bequeath sagelike guidance unto the next class of angsty asthmatics? Well, some people call him Brian. Others call him the original Antichrist Superstar.

But we can call him Marilyn Manson.

For the better part of the 1990s, Marilyn Manson fulfilled the all-important role of the shock-rocker. Building upon the recipe established by Alice Cooper, Manson tossed hard-rock and controversial lyrics in a blender, slammed on the frappe button, and topped the whole thing off with a heavy dose of theatricality-syrup. The result is an inebriating concoction that gives pimply-faced loners an outlet, an excuse to swear at authority and school and religion.

Also working in Manson’s favor is the fact that his persona is that of a Redbull-guzzlin’ drama-kid. His complexion is always ghoulish, his sadomasochistic wardrobe consists of veritable torture-suits, and he’s gotten with some legitimately smokin’ hot babes. More than once. He’s the guy that the junior-freaksters aspire to be, oddball who somehow became successful just by being his normal creepster self.

So let us tap our feetsies and bob our heads and praise the Dark Lord to the sweet sounds of Marilyn Manson.