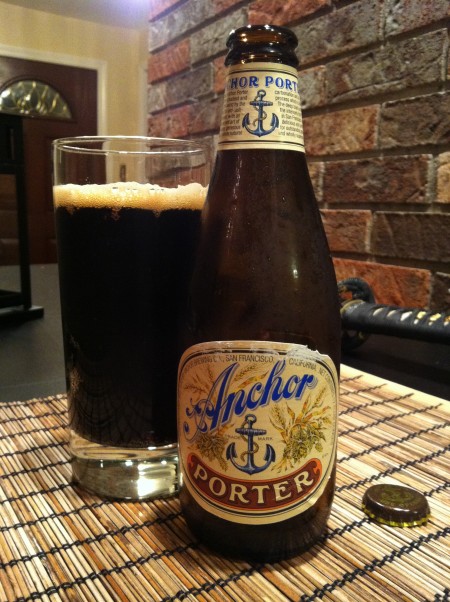 Having never been there, I can still say without hesitation that I’m a fan of San Francisco.

How does that work? Well, the Golden Gate City is responsible for producing some straight-up characters, individuals whose accomplishments and antics have tacked layers and layers of quality onto my otherwise free-floating existence. And probably yours, as well! If Frisco’d never been established, we’d be without a legendary metal bassist, our modern conception of the perfect family, the man with no name, and America’s most infamous serial killer.

In essence, San Francisco has carved a notch into my brain-bone as a city of repute, a community that regularly produces pure wonder. So when I ran into a sixer of the city’s Anchor Porter at my local beer-dealer, I knew that I had to bring it home with me. Hell, leaving it on the shelf would’ve been tantamount to sending it across the bridge to Oakland!

So who is this Anchor Brewing Company? It is a (proudly) San Franciscan brewery that employs the most venerable of beer-makin’ techniques. Their methods and standards, in their own words:

Each brew is virtually handmade with an all-malt mash in our handmade copper brewhouse, a veritable museum of the simple, traditional brewhouses of old. We strive to practice the art of classical brewing, and we employ state-of-the-art methods to ensure that our products are clean and clear, pure and fresh.

Every bottle and keg of our precious beer is kept under refrigeration at the brewery, and at the warehouse of your local distributor. We know of no brewery in the world that matches our efforts to combine traditional, natural brewing methods with the most careful and modern methods of sanitation, finishing, packaging, and transporting.

I’m truly inspired by Anchor’s meticulous attention to detail and quality-control. I’m especially appreciative of such beer-reverence when I start contemplating (i.e., lamenting), the prevailing sentiments regarding oat-sodas. Whereas most just want the bubbly-drunk-water to get into their bellies and brains, the Anchor Brewing Company knows that some folks are actually interested in expanding their inebriation-palates.

That includes me. And I’m hoping/guessing/praying you, too. So let’s get into this brew!

Anchor Porter is a formidable beer, making the taste buds get their asses off the tongue-couch to do some laps around the flavor-track. Upon the first few sips, the porter is dark and gloomy, walloping me with an undeniable bitterness. But as I continued sipping, the bitter notes gave way to a roasted and furtively-angelic lusciousness. It’s akin to drinking a cup of espresso and having the sugar hit you at just the right moment. Bitter but sweet – sweet and then bitter! This boldness may be off-putting to brew-novices, but is sure to reward those more experienced and patient drinkers.

In terms of texture, this beer is something else entirely. I’ve effortlessly put away two bottles of Anchor Porter, and I equate this ease with the brew’s creaminess. This potable is rich without being heavy-bodied, its silkiness bathing the tongue and exciting the gums and soothing the throat. Additionally, Anchor Porter should be commended for its appropriate carbonation, giving the drinker just enough effervescence to stay POP!POP!POP! intrigued by bubble-power.

Anchor Porter manages to perform admirably even in the less pertinent arenas. Visually, the porter pleases the drinker by presenting itself as a dark-as-night, coffee-colored brew with a post-mocha head. Coupling this image with the burnt-caramel scent, this liquid not only respects its auxiliary components but damn-well flaunts `em!

Time and again, San Francisco has proven itself to be a powerhouse of a laid-back, neo-hippie city. I’m now more inclined than ever to believe this as fact, given the enjoyment I’ve derived from genuine San Franciscan brew-matter. Anchor Porter is a dark beer for those who appreciate dark beer and a daunting challenge for those indoctrinated to believe that light beer is worth celebrating. I would gladly sip on more of these beers, perhaps during a late-summer BBQ, warming myself with the dark liquor as means of compensating for the season’s unavoidable demise.

Anchor Porter is legit: B+