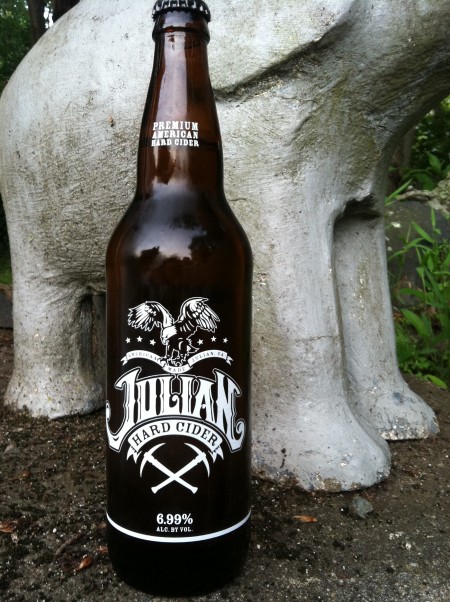 American as apple pie.
Well, that’s pretty good. Apple pie is warm and delicious and the basis for one of my generation’s greatest dick jokes. But I think we can do better.

American as apple cider.
This is certainly a step in the right direction. Drinking apple cider conjures up heartwarming memories of New England autumns – going to the county fair, roaming the `ole pumpkin patch, bundling up against the brisk breeze. Maybe just one improvement can be made…

American as hard cider.
There we have it! Perfect! Take all those awesome apple connotations, swirl `em around with the autumnal remembrances, and then cast a fuzzy jubilation over the whole damn thang. Is there really anything more American than apple-cum-booze? Perhaps apple-cum booze, but that’s a whole different story, filled with tears and therapy sessions.

During my weekly excursion, I was informed by the friendly neighborhood beer-dealer that hard ciders have begun taking the seedy underground culture of beer aficionados by storm. I displayed slight skepticism, but was reassured that apple-potables were, in fact, gaining ground on the West Coast. Always wanting to be ahead of the curve, I snagged myself a fat-ass bottle of Julian Hard Cider.

Curious, I did some reading on the brewery website – apparently these hombres use a recipe that originated in 1670. This is some straight up colonial shit and the folks at Julian don’t want anyone to question their nationalism. Hell, check out the description the back of the bottle:

Located in the frontier gold mining town of Julian, California, our company continues the American tradition of quality hard cider production using the finest ingredients, painstaking attention to detail and good old fashioned hard work. One taste of our premium hard cider and you will experience why Julian Hard Cider is “AMERICAN TO THE CORE”.

America? Cider? Gettin’ my drank on? I’m in.

I was first taken aback by Julian Hard Cider‘s appearance. Unlike most ciders I’ve come across, this brew pours into a translucent green. Interesting. I put the glass to my nose, took a whiff, and detected a strong sweetness. Getting even better – time for a sip.

The most startling surprise came when I allowed the drink into my gullet. Whereas most apple-brews are sweet, mayhaps even saccharine, Julian Hard Cider is clean and tart. The crispness and effervescence dance around the mouth, but doesn’t leave a coating on the tongue. In fact, there’s really no aftertaste to note. If I didn’t know better, I might even guess that this was some sort of apple-wine.

But alas, this is a mighty fine brew.

Would I drink Julian Hard Cider as my standard beer? Nah, dude. I don’t think it’d go well with a burger and it’s not something I can see myself milking across the span of a few hours. But for a light, refreshing alternative, it’s tops.

Throw on a pair of applebottoms and grab one!