I woke up gagging on the thick air of history. I then proceeded to spew blood all over my shoes. I never knew my stomach could hold so much of the vital fluid.

Then again, I guess it couldn’t.

I’d always hoped that the journey would be pleasant. Some sort of transcendent joyride in which I’d be bathed in bliss. It was an appealing prospect, the idea that by attaining my most desired aspiration I’d also be stumbling into a world of spiritual enlightenment.

During my preliminary research, I even spent quite a bit of time investigating the potential ramifications. Of Nirvana via science. But this was just another dead-end that I’d come across during my explorations. And I should have seen it as such.

Just think about the fragility of the human body. Even the most finely tuned and well-kept of our bodies are still laughably feeble. Take one of these bodies and put it in a relatively low-speed car crash. The potential for serious injury while traveling thirty miles per hour in an automobile is astronomical. Even in the safest of automobiles. Even buckled up.

Now imagine the potential for injury while traveling thirty years per hour.

Flinging as much blood off of my shoes as possible, I faltered, lost balance and fell on my ass. It hurt — more than normal, as though I had been shoved by some weight-training, `roided out Gravity with a bad attitude. For a couple of minutes I let the cold gravel of the alley soothe my fevered forehead. I hoped it would break the sweat. It didn’t.

Eventually I tried to get up, but I was too weak. Simply put, I had expended all of my energy just trying to survive the journey. Examining my arms, I became so disgusted that I instantly vomited. Luckily, no blood this time. Both arms were blanketed in the vilest hives I’d ever seen. The fat red sores were pulsating, growing by the second and threatening to burst. Hoping to prevent the expulsion of any more bodily fluids, I folded my arms over my chest, looked skyward for a moment, and then closed my eyes.

And that’s when the lightning struck my legs. Not literally, mind you, but the sharpest, most jolting pain I could ever conceive. If I hadn’t already been paralyzed, the fire in my legs assured that I would be. From my upper thighs right down to the tips of my toes, an excruciating blast of sensation made its presence known. Over and over again.

I knew that the voyage could wreak havoc on my body. But I had no clue that it would render me immobile, laying in agony and gasping for breath. I had to use all of my remaining mental faculties just to prevent myself from pissing my pants. But just in case, I grabbed a newspaper and proceeded to shroud my shivering frame. As the paper blanket made its way towards my chin, my eye caught the date.

Confident, I threw up and passed out. 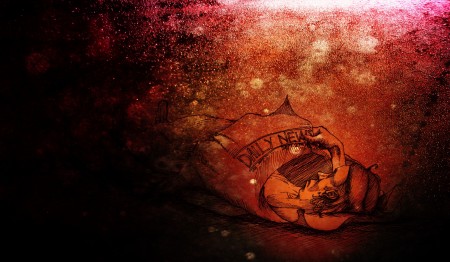