Archives
« Michael Jackson Is Alive and Well In Brazil
I CAN’T WAIT TO FEEL YOUR LOVE TONIGHT. » 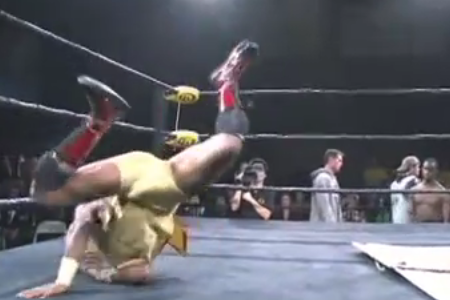 This is the best thing the Brothers Omega have seen in a long time. Props to my friend Charlie for bring it to my attention. What is this clip exactly?

The Osirian Portal of CZW are clearly the best tag team in years. In the middle of the match, they use some sort of ancient voodoo hypnosis to put everyone under their spell. What follows is simply the greatest thing ever. A fucking breakdancing competition starts. Everyone begins cutting a rug, from the Osirians themselves, to some random fat dude who is probably an amazing and integral part of their promotion.

This is fucking wrestling.

Forget all the homoerotic bullshit of today’s wrestling. What I miss is the homoerotic bullshit of yesteryear’s wrestling. When the characters were fucking characters. Madness! Absurdity! Undead people!  Pharaohs! That’s the sort of shit I’m looking for. Hypnosis and breakdancing and reincarnations of Rerun? If mainstream wrestling was like this, I’d watch it every fucking week. Every. Fucking. Week.

WWE and whatever, stop trying to legitimize wrestling in the wake of MMA. Take it back to this shit. This glory.

Hit the jump to have your mind blown.