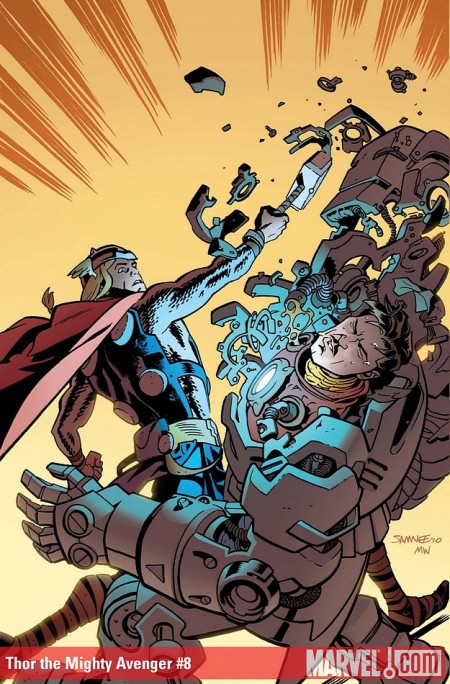 Marvel’s announced the cancellation of Thor: The Mighty Avenger. And I have to say without any irony that this significantly bums me out.

Thor: The Mighty Avenger stole this site’s heart from the moment it was released. A lighthearted, beautiful rendition of the god of thunder and his experiences in good ole Asgard caught me off guard. Thor usually broods, Thor usually swings his hammer and pouts about Odin dismissing him from his realm. This was different. This was fun and sweet and it had heart. I was smitten. My brother was smitten.

The issues were self-contained romps that complimented each other in growing towards something greater.   While sites have reported that the title will get a satisfying conclusion in January, I can only wonder what they were building towards, had they been given time. I lamented last week about the deluge of Thor titles hitting the market. Something had to give. Unfortunately, it is my favorite Thor title on the market getting the axe. Maybe it was too kind, too witty, too innocent. Even with forthcoming titles getting nixed, Deadpool has ninety-three titles. Logan as a zillion. Skint and bawdy humor and et cetera, and et cetera.

I have to tip my cap to Roger Langridge and Chris Samnee. They sold me on a title in three or four pages of the initial run, and two creators who I had never heard of before became instant favorites. Crisp dialogue, tight scripts, gorgeous, ephermeal artwork. It all came together! Ah well, motherfucker. Nothing gold can last, right? Kudos to the two of you, for proving that there’s room for wonder amongst the smoldering and brooding in the Marvel universe.

If you haven’t checked out TMA yet, get the fuck on it. Your negligent ass killed it. The least you can do is enjoy the entire run, which, consider its only eight issues, is not only brilliant, but cost efficient.