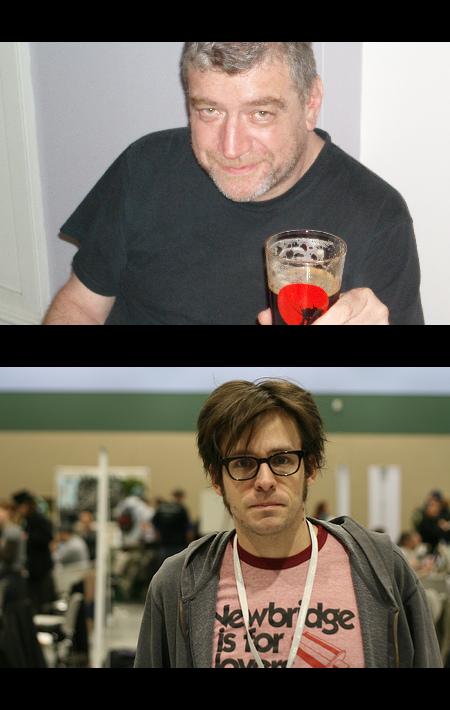 It isn’t always easy to choose a best comic of the week. Some weeks, none of the funny-mags I’ve picked up have any sort of Wow! to them. Other times, I’ve got a stack full of quality books and hate having to choose just one to feature.

This week, I’ve decided to make the entire process a bit easier. The name of this column, Images & Words, is named after the two separate media that combine to make comics. Oh, well, it’s actually named after a Dream Theater album. But the pun stands. So please just roll with it. Anyways, comics are composed of illustrations and text. As such, this week I am going to highlight both the artist and writer with whom I was most taken.

As the penciller for Garth Ennis’ Preacher, Steve Dillon has sketched his way into comics history. The man could have hung up his pencil after completing that series and he would have been deserving of any of the accolades thrown his way. That’s the fact, Jack!

But he decided to keep drawing. Hell, everyone with both talent and a passion for utilizing said talent should keep on trucking. Unfortunately, I haven’t really cared about anything Dillon has done since finishing Preacher. Maybe that speaks more to the predicament of setting the bar too high. In any case, I’ve been less than enthused about Steve Dillon for sometime now.

But as I read through the first issue of Ultimate Avengers 3, I couldn’t help but feel warm fuzzy feelings for the art. Some may say that Steve Dillon is too cartoony or simple. But what they see as a flaw or inadequacy, I interpret as a strength. Steve Dillon’s art is impressive because it is just so damn clean. There is an economy at work, a policy of only putting to paper what is necessary to create the image.

Even the panel structure is incredibly tight. None of the panels bleed into one another, none of the gutters are shaped like kooky designs, and none of the characters or action hop out of one panel and into another. While this may seem boring, Dillon does an amazing job of framing each individual picture, granting each a reverence and creating an almost cinematic narrative progression.

With no energy expended without warrant, Steve Dillon’s images are absolutely powerful. Extraneous details and minutia are forfeited in favor of strong centers to each picture. In fact, many of the most striking panels feature a single figure’s profile; Blade, the new Daredevil (quick aside: kudos to Mark Millar for not hesitating to give Jeph Loeb’s Ultimatum the middle-finger), War Machine. My favorite image of this comic is also composed of a single character; a full splash page of Steve Rogers with his fist determinedly planted in his hand.

I’m not messing around, man! Steve Dillon executes on this book. With a simplicity of style, the action (which includes vampire decapitations and Hulk-chompings, by the way) is even more poignant. Check it out. 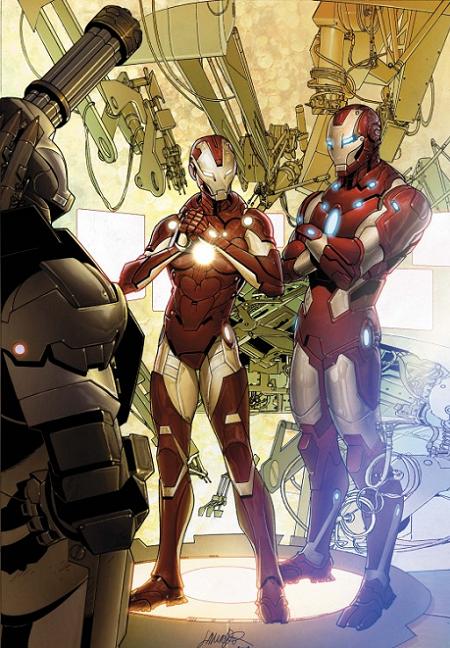 It’s no secret that the Brothers Omega have a serious affection for Matt Fraction. The dude has made onto the level many a time. If you know nothing about the man, watch this. If you don’t have the seventeen minutes right now, just know this: Fraction lays it down. He manages to sneak truly groundbreaking ideas that push the envelope into franchise titles.

He broke onto the scene with Casanova. He helped make Iron Fist cool. And he’s the man behind The Invincible Iron Man, the signature title of Marvel’s newest fan-favorite.

The 29th issue of The Invincible Iron Man is just another testament to the prowess of Master Fraction. While there are a number of storylines being presented, they are interwoven seamlessly. Pepper Potts convinced Stark to put a repulsor in her chest, allowing her to become the hero Rescue. Tony has re-started his company, now branded Stark Resilient, in the hopes of providing free energy to the entire world. The Hammer family has peddled Detroit Steel to both U.S. military agencies as well as the Japanese. Oh, and Jim Rhodes offers he services as War Machine to the U.S. military but is basically told to screw because of his relationship with Tony.

But Fraction makes it all clear and easy to follow. And more importantly, he keeps things fresh. One can only chuckle when Tony and Pepper go in for a kiss but are literally repelled by the electromagnets in their chests. We see Tony turning on the charm to gain access to his rival Sasha Hammer;

Tony: Am I insane, Sash, or are you alternately the hottest and brightest woman in this room?

Sasha: It’s a small room and you have dumb friends.

Tony: I also have a house on the moon. Let’s get the hell out of here. I hate parties.

Matt Fraction strikes me as an individual who grew up loving comics as well as stories of other media. He demonstrates a profound respect for the history and established mythos of Marvel characters while still pushing them into broader and more universally-relevant realms.

Fraction is not a great comics writer. He’s a great writer for comics.