Archives
« Bukowski Wants You to BURN IT DOWN!
Billboard Death Metal 3 » 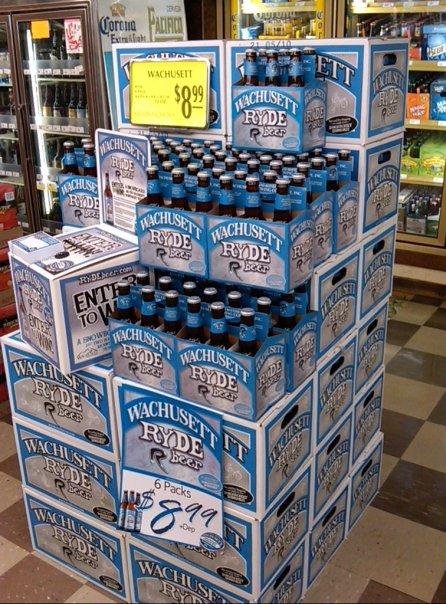 I’m sick. For the last few days, I’ve woken up to find my entire body screaming in agony. Sure, I’m no stranger to the run-of-the-mill aches and pains that come with daily living, but I’ve been sore beyond belief. Even putting on a t-shirt has been a chore. Additionally, I’ve got a swollen lymph node a fever you can’t sweat out. It’s mad bobo.

So tonight, I’m taking it easy with the Brew Review. Sure, I’m sipping on a little beer. But honestly, I think that if I drink a full beer I might spontaneously combust. So I begin this edition of the regular Friday post by acknowledging that I haven’t actually consumed a full beer. Instead, I’ve swigged it and spit most of it out. Hey, it seemed like a good idea in that made-for-TV movie Sideways. You know, the one from Japan.

The beverage I’m (not) drinking tonight is Ryde beer from the folks at the Wachusett Brewery. I grabbed a six-pack simply because I had never seen the product before and there was no real description was to be found on the package or the bottles’ labels. Maybe it’s a stupid reason to buy something, but I was motivated purely by curiosity. “What the fuck is a Ryde beer?”

As per usual, I made a pit stop at product’s website. And this was the moment in which I first said Oh no. A slideshow cycled through pictures of snowmobiles, dirt bikes, motorcycles, bicycles, surfboards, and other various means of transportation. Or, I suppose, RIDES — now I get it! It’s a fucking pun!

Looking closer, I found this self-description:

According to history, man’s travels, whether it be bike or board, began with the invention of the wheel. From there, the bicycle wasn’t too far behind. One of our founders, Ned, always believed great ideas have come from getting out, going for a ride and getting into the zone. One day, inspiration struck for a great celebratory brew. Our brewmaster, Howie, responded with something not found in any other concoction brewed in New England.

RYDE is an uncommon brew that balances the unique aroma and flavor from dry-hopping with the crisp, dry finish of rye, making it DANGEROUSLY DRINKABLE. Wherever your travels take you, enjoy the RYDE.

Ok…so let me get this straight; Ryde beer is targeting a demographic that revels in driving around. A beer marketed towards drivers. Brilliant. These bozos really need to consider the following PSA:

Anyways, let’s get to the matter at hand. I drank Ryde beer out of the bottle and spit it into a plastic cup from the kitchen cabinet. It was a good arrangement and I would recommend it to anyone looking to taste beer while sick. Sniffing at the mouth of the bottle, I’d say the beer has a pretty dry odor which is coupled by a faint fruity quality.

Putting the liquid into my food-hole, I wasn’t really pleased or displeased. Ryde beer tastes like any standard rye-based brews. It’s got a hoppiness to it, it’s a bit dry, and the texture is quite watery (which I suppose plays into its claims of being damn drinkable). For better or worse, there’s really not too much to note about this beer. Truthfully, I’m not even upset that I’ve been spitting it out.

Wachusett Brewery, this ain’t a bad drink. But it sure ain’t a good one, neither. And maybe you should rethink the decision to market this towards people using automobiles. I feel like that’s just asking for trouble. When it comes to local breweries, you’ve proven to me once again that you are the retarded third-cousin of the behemoth that is Sam Adams.

I really mean what I’m about to say. So don’t try to convince me otherwise. Ryde beers deservingly receives a C.