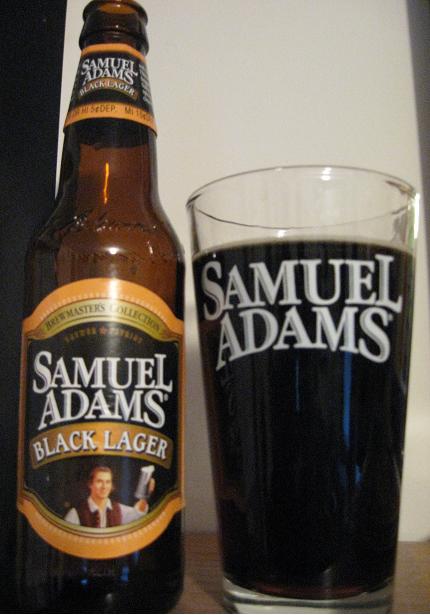 Welcome to a special mid-week edition of the Friday Brew Review! As a high school teacher, my life seems to include a number of regularly-scheduled compromises — meager wages, hours spent on projects for students who couldn’t care less, the frustration of not being allowed to swear for eight hours a day, etc. But every now and then, an occupational perk seems to hop out of the shadows and give me a hug.

Today’s embrace comes in the form of a snow day.

Which is actually quite amusing,  as it only started snowing an hour ago; about forty minutes after school would’ve ended. But hey, don’t think I’m complaining! With free time on my hands, I got to do stuff that I actually think is important, like reading some Palahniuk, writing a bit, planning a drum lesson, watching a DVD…

And of course, sippin’ on some beers.

The beverage of the day is Black Lager, as produced by Samuel Adams. I originally picked up a six pack of these Bad Larrys last weekend, never imagining that I’d review them. But with some spare time, I busted out a couple today and decided to go for it.

Black Lager is no misnomer. Pouring the beverage into my glass, I took note of its color — a black which instantly evokes thoughts of stouts. To be fair, it is not the absolute absence of color, as holding the glass to the light revealed more of a brown hue. Visually, this beer gave the impression that it would be syrupy in texture, perhaps flavorful but not especially suited rapid consumption.

Ok, strike that last comment. To say I was wrong might suggest that Black Lager is an appropriate beer for funneling or pounding. While I think it can be done, it’s just  too delicious for that shit. This Samuel Adams product has a bit of a kick, with  a roasted taste and bitter notes  that are incredibly smooth. The back of my tongue and even the roof of my mouth soaked up the liquid, helping me remember it long after swallowing. So while this is undoubtedly a dark lager, with a   taste and aroma that linger, it is also markedly crisp.

Curious, I wanted to know what Sam Adams had to say about the brew. According to the brewery, Black Lager (which is part of their elite Brew Master’s Collection) is stylized after a traditional German Schwarzbier. In their words,

When one sees a beer with a darker complexion these days, more often than not it’s a Porter or Stout. However looks can be deceiving. There exists a style older than both and generally less well known; the Schwarzbier, which literally translated is “Black Beer.” Unlike its dark cousins which both hail from Britain and are highly hopped ales, Schwarzbier comes from Germany, is lightly hopped and is fermented using a bottom fermenting lager yeast.   Samuel Adams ® Black Lager is brewed in the tradition of the latter. A medium bodied beer brewed using several different roasts of malt to give the end product a smooth body and a depth of malt character that has to be tasted to be believed.

Yes, I’m a Samuel Adams fanboy and it’s been documented many times. So perhaps you should take this review of a grain of salt. Actually, you definitely should — any beer that I drink on a free day off from work is subject to scrutiny.