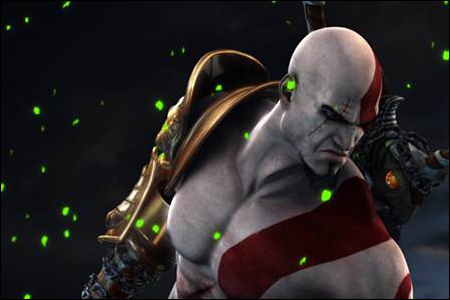 I downloaded and played through the God of War III demo last night, and I was left with a resounding MEH. Hollered from the mountains, down onto the cowering PS3 sitting in the cower of my room. It asked me, Ian, what’s wrong? And I shouted at it, You have underwhelmed the fuck out of me! I was actually thinking of picking up the GoW collection just to play this thing. Wow, I’m fucking glad I didn’t.

First off – this demo is by no means bad. If you liked GoW or GoW II, then you know exactly what to expect out of this bad boy.

And maybe that’s the problem for me.

Coming off of Uncharted 2, which is one of the best games I’ve played in a long time, perhaps I had unrealistic expectations for this puppy. Especially in the graphics department. It’s not that I’m a graphics whore by any means. I can still go back and rock a PS1 game without any complaint. But Jaffe has been hyping this beast’s graphics since forever. I remember last year he was all like, man, if you think Gears of War II looks good, you ain’t seen shit. Here, have a quote:

“I thought Gears of War 2 looked about as good as a next-gen game could look…[but] dudes and dudettes, f****** wait till you see the amazing graphics… just f****** wait.”

“I ain’t no fan boy but this mother f****** game looks like nothing you’ve ever played… and you can hold me to that when this thing hits and when they start showing gameplay footage. It looks like a painting come to life -it’s THAT good looking.”

My response? No, not really. Not at all.

I booted this thing up, and I was all…really? That’s all you’re offering? Wow.

A lot of fanboys seem to be defending the graphics, pointing out that Uncharted 2 runs at 30fps, while GoW III is running at 60fps. Let me make something clear – my brain can’t count frames per second. And secondly, I couldn’t give less of a fuck between 30fps and 60fps. I know this is decidedly non-hardcore to say, but whatever, suck it down.

Anyways, I’m done being a graphics whore for the moment. Because I’m just as bored by the gameplay. It’s just, well, it’s just more of the same. I think there’s some merit that can be applied to games that don’t do anything new, but they do everything very well. So it’s not that it simply doesn’t reinvent itself, it’s just, I don’t know, maybe I’m fucking bored by the gameplay at this point.

It breaks down pretty simple:

It’s just tired for me. If you love GoW, and you want just more of the same, you’re going to be in love. And as ridiculous as it sounds in light of all my belly aching, I’m still going to buy this game. A lot of my bitterness comes from expecting something more out of this new offering.

Hey Ian, you dickhead, this is a fucking demo.

Touche, and you win that point. But isn’t a demo supposed to be like, you know, selling the game to people? Between being touted as some masterpiece, and having just finished Uncharted 2, and perhaps expecting something new and fresh out of the first next-gen GoW offering, I’m just let down a smidge. The demo isn’t bad by any means, but it didn’t do anything to inspire a ZOMG, I NEED THIS SHIT TO DROP feeling in my stomach. I was left with, Oh, Yeah, GoW on the PS3. Cool, or something.