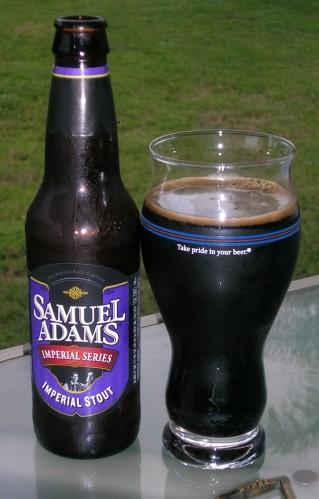 Friday — this, of course, means time to drink beer.

Unfortunately, for the past two days I have felt terrible. I don’t usually get sick, so when I do I like to think that the ship has finally hit the gigantic fuckin’ iceberg. Maybe I’ve got Swine Flu. Or polio. Or something.

Probably not though. What I should do is relax, go to bed early and get ready to feel better in the morning. But, it’s Friday and that means I have to fulfill a promise I made to you to consume alcohol and report on it.

Regardless of what alcoholics tell you, drinking when you’re sick will not make you feel better. You may smile a bit a more, but after passing out you will wake up feeling worse than drunk and sick — this is synergy in action. So it was with some trepidation that I approached the taking of my weekly drink.

It is with this preface that I begin to ask for your forgiveness. You see, when I first conjured up the notion of the Friday Brew Review, there were a few general guidelines to which I hoped to adhere. First and foremost, every Brew Review is to feature a new drink — absolutely no repeats. Essentially, this is my excuse to feel funny with different substances. Secondly, Friday is the day for guzzling beer. To the best of my ability, I am to drink and write the review as an honor to the end of the work week and the beginning of the weekend. Lastly, Samuel Adams was to be off the table.

And that’s where this week poses a problem. The thing is, I love Sam Adams. In my eyes, the Boston Beer Company can do no wrong. Their seasonal beers are the perfect accompaniment to timely festivities, their standards are wonderful, and any specials they put out are always entertaining. I don’t know, maybe it’s because I’m a dirty Bostonian who has trouble pronouncing that letter between Q and S, but I have an unhealthy infatuation with Samuel Adams beer.

But since I wasn’t feeling well, and knew that imbibing alcohol could make me feel worse, I decided to throw out the Samuel Adams rule for this week.

This week’s Brew Review finds me drinking Imperial Stout from the good people at Sam Adams. I picked up a four-pack at my local liquor-dealer and it ran me a little over $10. Although a little expensive, I tried to put it in perspective; whereas $10 at the liquor store gets me four good beers, the same $10 at a shitty bar gets me one drink + tip.

As a quick aside, I just want everyone to realize how badly they’re being screwed when going out to bars/restaurants/clubs. Maybe I shouldn’t be promoting this  idea in such troubling economic times, but staying in and drinking is much cheaper than going out. Also, when I’m drinking alone in my house I can take off my pants and only get in trouble with my Dad, whereas taking off my pants in public gets me in trouble with the law. Just ask this guy.

Anyways, back to the Imperial Stout. According to the Samuel Adams website, this is a new beverage for the company, originally being brewed only earlier this year. Apparently, the Imperial Stout takes its formula from the concoction created by English brewers to honor the Russian Catherine the Great in the 18th century. I don’t know too much about this broad, but if she was down with Imperial Stout she’s good in my book.

As the noted on the Samuel Adams Imperial Series website, the Stout is a “big” beer. With each sip, I feel my taste buds bashing each other in an attempt to figure out what exactly is going on. The Boston Beer Company describes,

The first thing you notice about this beer is its color. It is black as night and almost completely opaque. Next is the cappuccino colored head: the aroma is filled with notes of coffee, smoky chocolate and licorice. And the taste delivers on all of those aromas, you can pick out each one.

Yeah, they’ve got it down pat. I’m staring at half a box of pizza pie that I’d love to jam into my food-hole, but just can’t bring myself to do it. The Imperial Stout is its own little treat, not just a lubricant with which to wash down food. Personally, I feel like I’m buying into the hints of licorice, going through the brews as though they are bitter candies.

I’ve finished three of the beers and I’m not sure if I’m drunk. Maybe I’m just tired. Maybe I’m sick. Maybe I’m drunk, tired, and sick. In any of these instances, I’m glad that I’ve guzzled Imperial Stout — it is a filling and satisfying nightcap.

Take it with a grain of salt — I am a Sam Adams fanboy — but Imperial Stout gets an A-.