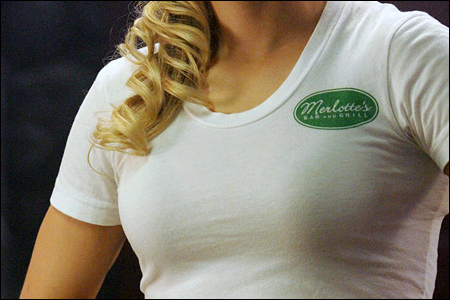 Do you remember where you were, the first time you saw Anna Paquin’s tits in True Blood? Yeah, me too. I was right next to my girlfriend, trying to not let my boner show. However, as the second season has gone on, we’ve seen her boobs roughly six-zillion times. Awesome, right?

In a truly shocking moment, I am tired of her boobs. There was a point when I absolutely adored them, all done up tight in her little Merlotte’s uniform. Or on Bill’s bed. But now I’m tired of them. Sorry Alan Ball and company, I’m jaded.

Maybe it’s because every time Sookie is naked, and showing them goodies, she’s usually crying and lamenting with Bill in some bedroom somewhere. No, seriously. All they do is fuck, and have these awful Dawson’s Creek conversations.

Sookie! I CANNOT ALLOW you to go there and blahdy bloop and let me munch your neck hey you have tits…

BILL! Don’t give into your vampire side you’re a human too sugary sophmoric bullshit et cetera…