Quentin Tarantino is a Subversive Basterd 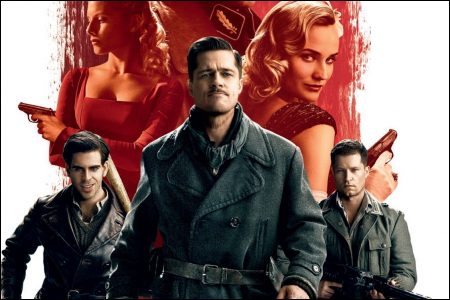 Quentin Tarantino’s new film, Inglourious Basterds, is about a lot of different things. On the surface, Basterds is a simple World War II-era story in which a band of Jewish-American soldiers travel into Nazi-occupied France in order to kill (and scalp!) as many Nazis as possible. Of course, when Tarantino is at the helm of such a plot, it can only be accompanied with brains bashed in with a baseball bat, shootouts, explosions, witty banter, a Mexican standoff, sexy women, and all of the director’s other trademarks.

But much more importantly, Inglourious Basterds is a film about film. About the subversion of film, to be more precise.

With that being said, it is worthwhile to first delve into the notion that Inglourious Basterds is actually an exploration of film itself. Conspicuously, many of the characters have various positions within the film industry; Shoshanna owns a cinema in Paris, Marcel helps maintain and operate said cinema, Frederick Zoller is a Nazi war hero starring in a biographical movie, German Minister of Propaganda Joseph Goebbels is tasked with producing this movie, and German actress Bridget von Hammersmark is a double-agent working for the British. As these pivotal characters play a number of different (yet equally important) roles, Inglorious Basterds suggests that the consciousness of film is stocked with varying strains of the human condition.

More pragmatically, Inglourious Basterds’ advocacy on the behalf of film can be found in its plot. While the trailers and taglines are advertising the fact that the movie features a bunch of Jewish-Americans killing Nazis, they neglect to mention that the Basterds’ true aim is to assassinate several hundred top Nazi officials (including Hitler himself); conveniently (or is it thematically?), these officials are all going to be gathered together at Shoshanna’s cinema for the premiere of A Nation’s Pride, Goebbels’ newest piece of propaganda. Resultingly, the Basterds spend a good deal of their inglorious adventures trying to figure out how to get into the premiere so that their primary task can be completed. By centering his newest work on the idea that a movie theater can be the single most important place on Earth, Tarantino effectively demonstrates the power and magnitude of film.

Thirdly, Inglourious Basterds works as a sort of self-aware investigation of film through much of its overt exposition. The name-dropping of (ostensibly classic) foreign language films, actors/actresses, and directors becomes so ubiquitous that I began to sense myself tuning them out — every character seems to get a chance to talk about movies at one point or another. Even less subtle is  the brief narrative pause in which a Samuel L. Jackson  voice-over presents  an anecdotal history of 35mm’s more explosive qualities. And although this segment is well-done and wholly entertaining, other (less obvious) narrative devices could have been employed in order to convey the same information. But by deftly incorporating references to the film industry and even the literal film itself, Inglourious Basterds manages to keep the forefront of the audience’s mind more consciously concerned with movies.

So yes, it is obvious to even the least astute viewers that film may be the very crux of Inglourious Basterds. More interestingly, though, is the idea that Tarantino is commenting on cinematic subversion, an act to which he is no stranger. The spirit of subversion, of challenging the power structure at large in the hopes of building anew, is embodied in the plans of Shoshanna & Marcel.

Shoshanna conceives of a strategy with which she can effectively destroy the oppressive regime under which she has lived & avenge the death of her family; she allows the Nazis to premiere their newest propaganda film at her cinema so that she can:

A) Splice in footage of her own anti-Nazi sentiments.

B) Lock the doors and burn down the entire theater, killing her enemies in the process.

Furthermore, Shoshanna convinces Marcel that her collection of (highly flammable) 35mm films will be more than suitable to fuel the fatal fire.

The plan goes off (albeit not without a hitch or two), and Inglourious Basterds ends by revealing itself to be a sort of alternate-universe version of World War II, in which the Americans win in 1944. Therefore, the viewer is left with the impression that the subversion of film (the claiming for one’s own that by which he/she has been oppressed) can lead to the defeat of the most tyrannical of forces.

To reiterate, Shoshanna and Marcel take the weapon of the ruling power (film) and use it for their own purpose, which just so happens to be counter to that of those wielding the weapon in the first place. Playing to a crowd of shocked/confused/disgusted Nazis, Shoshanna’s filmed message instructs Marcel to burn it down, prompting him to flick his cigarette into the 35mm collection. This act is especially incendiary because it is brought about by two minorities (a Jew in hiding and a black Frenchman during the occupation), and there is something resonant in the idea that scourge of an oppressive regime can bring about its demise. And although the literal result of burning the evil Nazi crime lords to death is an amazing scene, its figurative implications are far more fulfilling.

In a sense, what Tarantino seems to be advocating is not for blanket imitation or pastiche; instead, he believes that the forms of yesteryear can be manipulated in such a way as to become new entities altogether – thereby allowing for the possibility of resisting the structure as it originally stood. Tarantino has always taken bits of pieces from various sources (spaghetti westerns, art house, grindhouse, Blaxploitation, kung-fu, etc., etc.) and added them together with new elements as to create original pieces that incorporate some previously established elements that have stood the tests of time.

Maybe I’m going on a limb here, but I can’t help but feel as though Inglourious Basterds is more than just an old-fashioned Nazi-killing jamboree. It’s about the power of narrative, the persuasive force that is propaganda, and the hope & possibility granted to those who defy the standards by reworking the supposedly predetermined into something liberating and novel.

In any case, I’m really digging Inglourious Basterds — all I have done since watching it tonight was ponder these (Insightful? Ridiculous? Misguided?) ideas and attempt to sling them into my word processor. It’s almost 4 AM and all I want to do is see the movie again. Too bad I have to do some other stupid shit first, like edit these two pages and then go to sleep.